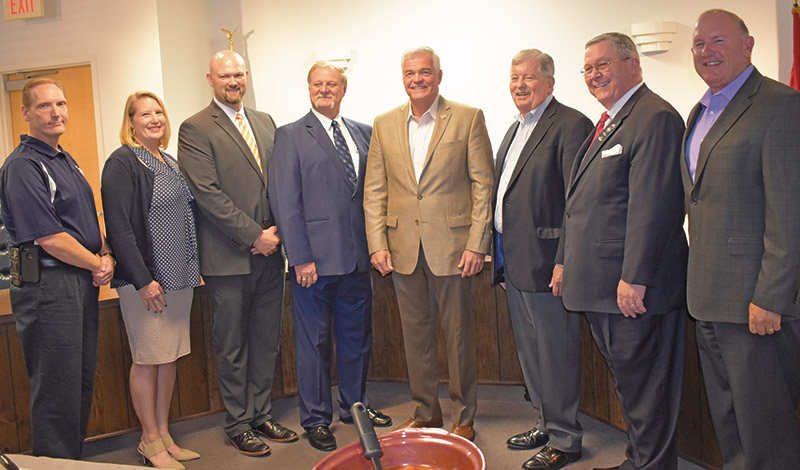 That would be upgraded sidewalks along Main Street (U.S. 25W) between First and Fourth streets, including new curbs and gutters and more pedestrian crosswalks. It’s all dependent on the city getting a state grant to help pay for the work.

During its September meeting last Thursday, the City Council approved a resolution to apply for a Tennessee Department of Transportation Multimodal Access Grant of up to $1 million to pay for the upgrades.

The city would pay a 5% match to the grant, if approved, and work could begin as early as next summer, City Manager Michael Foster said. The work is expected to come in two phases, with the second phase including sidewalk upgrades down the side streets (First to Fourth streets), as well.

“In the first phase, we’ll be adding curb and gutters back in on U.S. 25W, along with pedestrian crossings,” he said.

“We want to draw more people into downtown, and we hope these improvements will help lead to more private redevelopment, such as new paint and windows on some of the buildings,” Foster said.

“People are coming back to downtown, thanks to attractions like the Coal Creek Miners Museum, the [Coal Creek] Smokehouse restaurant and the Splash Pad,” he said.

Rocky Top has become popular with all-terrain-vehicle riders who come into town off the nearby trails of the Windrock Off-Road Park. The city was able to get the state legislature to pass a law allowing the unlicensed vehicles to operate on certain city streets.

Over the years as TDOT has repaved Main Street, the curbs of the existing sidewalks “have been paved over, making the sidewalks less appealing to pedestrians,” Foster said.

“Putting the curbs back in will create a buffer between the road and the sidewalk on both sides of the highway,” he added. “People are more apt to use the sidewalks if there is a buffer.”

The sidewalk upgrades also are designed to make them compliant with the federal Americans With Disabilities Act (ADA), Foster said.

TDOT plans to repave U.S. 25 through Rocky Top during 2020, and Foster said he believes the sidewalk upgrades could be timed to coordinate with that work.

“We’re also asking TDOT to narrow the traffic lanes to 11 feet from the present 12 feet to give us more room for the sidewalks,” he said.

Also during the meeting, the council:

• Approved purchase of a “jet trailer” for $54,000 for the Water and Sewer Department, Foster said it’s “essentially a big pressure washer” that the city will use to keep the sewer lines cleaned out. The department can even attach a TV camera to the line from the trailer to spot clogs and other problems inside the sewers.

• Approved a $90,000 contract to Cannon & Cannon engineers of Knoxville for preliminary design work on a sewer upgrade project that the city expects to cost about $3 million to complete.

Earlier on Thursday, city officials hosted representatives of the U.S. Department of Agriculture’s Rural Development agency during a reception in the council chambers to thank the agency for a $30,000 grant for design work on the sewer project.

Foster said that grant will help with work that can pave the way for additional USDA grants for the sewer upgrades.