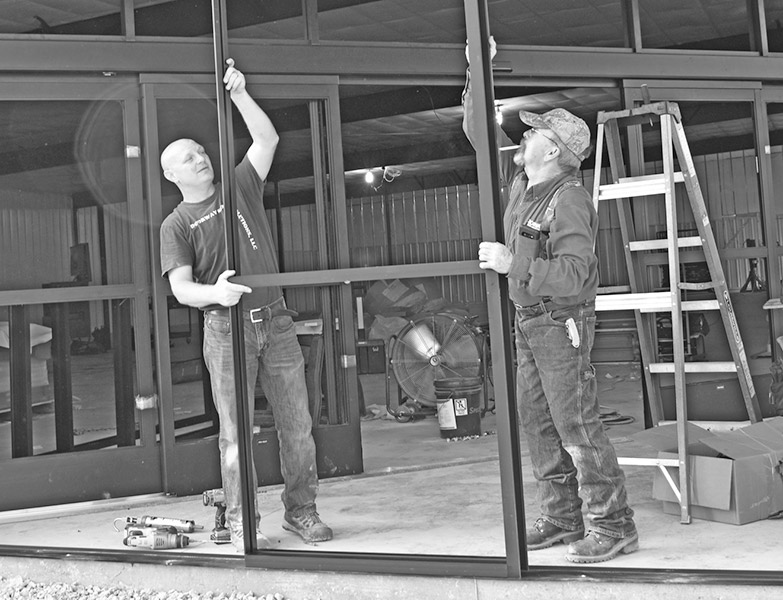 Brian Baker, left, and Ricky Ford of Doorway Services & Solutions of Knoxville work to install the doors and glass wall on Friday at the front of the new Dollar General store under construction at 330 South Charles G. Seivers Boulevard in Clinton. (photo:G. Chambers Williams )
Dollar General says it plans to open its third Clinton store by year’s end at 330 S. Charles G. Seivers Boulevard in a new building that has sprouted from an open field to a nearly completed structure over the past two weeks.

This newest Dollar General, near the intersection with U.S. 25 and the new bridge under construction over the Clinch River, gives the Goodlettsville, Tennessee-based chain another store within a five-minute drive of the two already in town.

The closest is only about a mile away, at 620 Clinch Ave. (U.S. 25), just across the river from the new store. Not much farther away is the other Clinton location, at 1200 N. Charles G. Seivers Boulevard, in the same strip center with Big Lots and Hammers.

There are other nearby stores as well, including one on Andersonville Highway in Norris and one on Lake City Highway (U.S. 25) between Clinton and Rocky Top.

Dollar General will open one of its standard stores, as opposed to a larger and more grocery-oriented Dollar General Market, at the new location, the company said through a spokeswoman.

“The store is slated to provide area customers with approximately 7,400 sales-floor square feet,” the spokeswoman, Angela Petkovic, said in an email.

“The store is also slated to offer customers stylish, on-trend home décor and an updated party-preparation selection, in addition to the same categories, brands and products customers trust Dollar General to carry,” she said.

About six to 10 employees will be hired to staff the store, and applications for those jobs are now being taken at dollargeneral.com/careers, Petkovic said.

“At this time, a grand opening is slated for late 2019, but understand that construction progress may alter this date,” she said.

Dollar General has stepped up its opening of new stores in recent years, and now has more than 16,000 locations in 44 states, employing more than 140,000 people. New stores are now under construction in the states of Washington and Wyoming, which will expand the chain to 46 states, the company said in a Sept. 9 announcement.

The chain describes itself as “America’s neighborhood general store.” The company began in 1939 as a wholesale dry goods store, J.L. Turner & Son, in Scottsville, Ky., and opened its first Dollar General store in 1955 in Springfield, Ky., by converting what had been Turner’s Department Store. The Dollar General name stemmed from its original policy of selling no items priced over $1.

For years, listeners to WSM’s “Grand Ole Opry” radio program from Nashville could hear ads for the chain with the jingle proclaiming, “Who says a dollar won’t buy much anymore?/A dollar’s still a dollar at the Dollar General Store.”

Today, there are still plenty of items sold for $1 or less, but there are lots of higher prices. Still, there’s not much over $10 in the stores, according to a recent story in The Guardian about the chain, titled “How Dollar General Took Over Rural America.”

“Dollar General is opening stores at the rate of three a day across the U.S.,” Chris McGreal wrote for The Guardian, a newspaper in the UK. “It moves into places not even Walmart will go, targeting rural towns and damaged inner-city neighborhoods with basic goods at basic prices – a strategy described by a former chief executive of the chain as ‘We went where they ain’t.’”

According to the story, “The chain now has more outlets across the country than McDonald’s has restaurants, and its profits have surged past some of the grand old names of American retail.

“The company estimates that three-quarters of the [U.S.] population lives within five miles of one of its stores, which stock everything from groceries and household cleaners to clothes and tools.”

On its own website (dollargeneral.com), the company says, “Dollar General provides value and convenience on products from some of America’s most-trusted brands and its own private brand merchandise in a carefully-curated merchandise offering of health and beauty products, home cleaning supplies, housewares, stationery, seasonal items, refrigerated and frozen foods.”

As for the decision to open a third store in Clinton, Dollar General’s Petkovic said: “Our customers are at the center of all that we do, and meeting customers’ needs is Dollar General’s top priority when choosing store locations.

“The company looks for places where we can offer customers an easy and convenient shopping choice, as we generally serve customers within a three- to five-mile radius, or 10-minute drive. We also take competitive factors, traffic patterns and community concerns into consideration.”

Dollar General also gets involved with the communities it serves, Petkovic said, noting that the company “is an ardent supporter of literacy and education through the Dollar General Literacy Foundation, which awards grants each year to nonprofit organizations, schools and libraries within a 20-mile radius of a Dollar General store or distribution center to support adult, family, summer and youth literacy programs.”

More information about the Dollar General Literacy Foundation and its grant programs can be found at dgliteracy.com, she said.

Dollar stores in general have been making a big push over the past 18 years to open more stores across the United States, according to a recent story on CityLab.com, a website dealing with urban issues run by The Atlantic Monthly Group.

“Though these ‘small-box’ retailers carry only a limited stock of prepared foods, they’re now feeding more people than grocery chains like Whole Foods, which has around 400-plus outlets in the country,” she said.

“In fact, the number of dollar-store outlets nationwide exceeds that of Walmart and McDonald’s put together—and they’re still growing at a breakneck pace.”