Mavs are one step closer

Beat down of East Ridge keeps Mavs on top of region

October 9, 2019 by Fred Strohl - Special to The Courier News 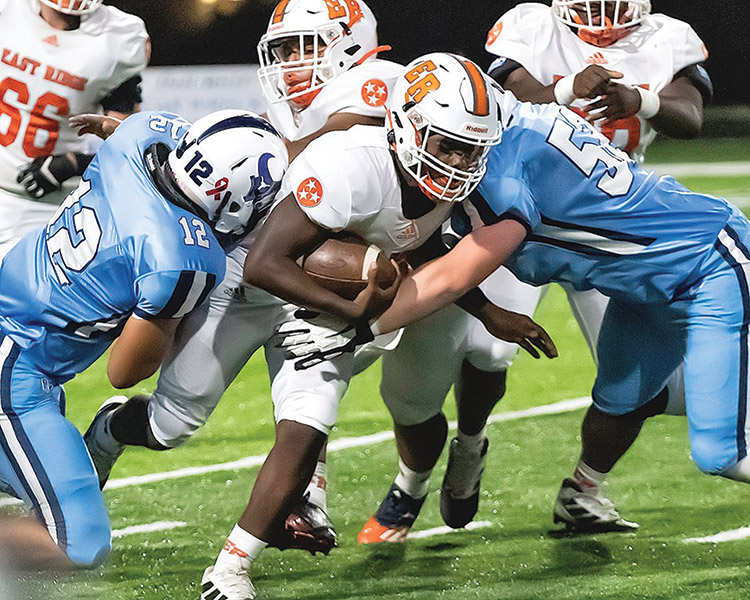 The Mavericks, now 3-0 in the region and 6-1 overall, are tied with East Hamilton for the top spot in the region. AC has already clinched a playoff spot and has an open date this week before finishing the regular season with three more games, including an Oct. 25 date at East Hamilton.

Last week’s win over East Ridge found the Mavericks increase their momentum of play heading into the second quarter after the game was tied at 7-7 after the first 12 minutes.

“Our offense got stronger as the game progressed,” said Mavericks Coach Davey Gillum. “Our offensive effort was strong along with our play on defense. My biggest concern from this game is the fact we committed a lot of penalties (10 for 107 yards) with a lot of them on defense and that is something we’re going to have to fix as we move forward.”

“We’re doing well, but we need the break and the fact it is during fall break is even better,” Gillum said. “After this, we have that three-game push before heading to the playoffs. This week gives us a chance to recharge before moving forward.”

The Mavericks opened scoring at the 9:39 mark of the first quarter when Hatmaker connected with Elliott on a 29-yard touchdown pass. Daniel Bethel’s extra point made the score 7-0.

East Ridge evened the count about six minutes later on a 56-yard touchdown run. Following the extra point, the teams were tied 7-7 at the end of the first quarter.

The Mavericks went ahead for good at 9:03 of the second quarter when Holmes scored on a six-yard run. Bethel’s extra point put the Mavs up 14-7. AC’s lead increased to 21-7 less than a minute before halftime when Holmes crossed the goal line from the one and Bethel added the extra point. Holmes scored his third TD of the night at 9:26 of the third quarter when he carried the ball into the end zone from the four. Bethel made it 28-7.

Holmes collected TD No. 4 at 6:57 of the fourth quarter with a one-yard run. Bethel increased the AC advantage to 35-7.

With five minutes to go, Hatmaker threw his second TD pass of the game with a 24-yard completion to Bryson Vowell. Bethel increased the lead to 42-7.

East Ridge scored with a 78-yard run with 3:30 to play to end the night’s scoring.

Following this week’s open date, the Mavericks travel to Chattanooga Central Oct. 18 before the Oct. 25 contest at East Hamilton. The Mavs conclude their regular season Nov. 1 at home against Sequoyah.