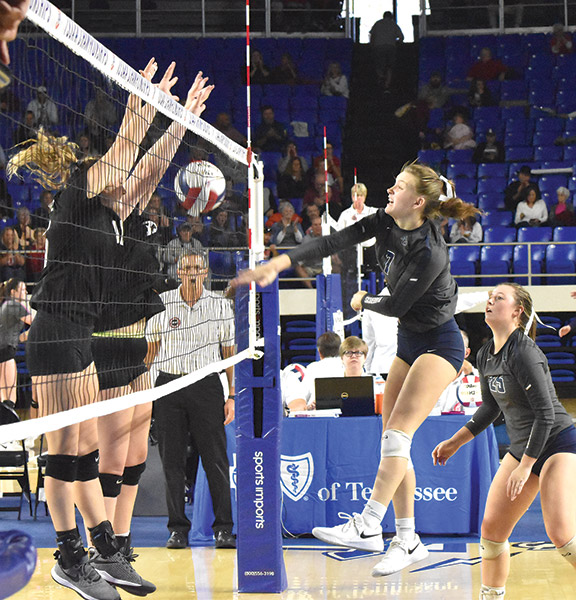 Lady Mav Mattison Rowland gets a spike during state tournament play last week. (photo:Collin Riggs )
They believed, and fought to the end.

Something changed, though, after the second set.

Small miscues seem to build up for the Lady Mavs.

East Hamilton’s strong attacks and vicious spikes left the Lady Mavs a little off-keel, a state they stayed in through the fourth set as well.

It wasn’t until the fifth set where Anderson County found their footing again. East Hamilton had found its rhythm and pressed hard, pulling ahead early, but the Lady Mavs fought their way back, first to a tied score of 12-12, then pulled ahead. They couldn’t clench those last points, though, and the final set ended 16-14 against the Lady Mavs, leaving them at 2-3 and sending them to the loser’s bracket.

Six hours later, the Lady Mavs competed again for a chance to stay in the state’s grandest volleyball tourney, this time against the Lexington Tigers.

Anderson County won all three sets against Lexington, although for a moment near the end it seemed they might repeat their earlier performance. During the third and final set, Lexington began to pull ahead and even gained a lead on the Lady Mavs as they began to flag and make mistakes the Tigers exploited.

During the same period, Mattison Rowland, Anderson County’s starting Middle Blocker, took a fall at the net and had to have her ankle wrapped at the medic table. Fortunately, Rowland managed to come back and finish the game and the Lady Mavericks took a deep breath and focused to score the last points they needed to come away with a win.

So ended the first day.

Anderson County started the second day against Sullivan South, who had lost 2-3 against Nolansville in the second round of the winner’s bracket.

Their opponent for this round would be… East Hamilton.

East Hamilton, like Lexington High School, dropped 3-0 to Portland High School in the second round of the winner’s bracket, causing a rematch between the two teams.

The results were, unfortunately, the same as the first game, with Anderson County tying down two sets against the Hurricanes and, just like the previous match, unable to cinch the last one.

East Hamilton went on to lose 3-1 to Nolensville in the quarter-finals, making the final game between Portland High School and Nolensville, a rematch after Portland initially beat Nolensville to send them to the loser’s bracket.

Nolensville, in the rematch game, beat Portland 3-1 to carry home the state championship.

Still – looking at things objectively, it’s quite amazing that a team with no seniors not only made it to the state playoffs, but made it so far as well. The team that beat them, East Hamilton, had four seniors.

It’ll be incredibly exciting to see just how far they go next year with a little more experience under their belt.

The entire team played extremely hard, but some were invaluable for the success of the team. Leah Freeman’s play as libero intercepting some incredibly hard attacks and setting up teammates deserves a mention, as does Hannah Freeman’s play as captain.

Hannah Freeman went above and beyond in keeping the team focused and strong in the face of mistakes and lost points. In the words of Yogi Berra, “90-percent of the game is half mental” and she did a fantastic job supporting the team with strong encouragement.

Morgan McMurray as well deserves credit for her strong attacks, which, although not out of the ordinary for her, still deserve the credit they’re due.

There’s so much to say from following the girl’s all season and seeing them play, but Dail Cantrell, the assistant coach for the team, says it best.

“The athletes worked hard all this season. We had told them that to win a state championship, it starts by getting to the final four and playing your heart out. They did that. They believed, and fought to the end.”