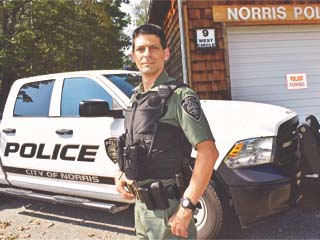 “I am pleased to announce that an offer has been presented and accepted by Mike Poole as the new Norris police chief,” Norris City Manager Scott Hackler announced on Thursday.

“Chief Poole has 17 years of law enforcement experience, of which the last three have been with the Norris Police Department as a patrol officer, detective, sergeant, and interim chief,” he said.

Poole, 45, replaced former chief Samuel W. Ogburn, who resigned over allegations of submitting fraudulent documents about the department’s firearms training to the Tennessee agency that supervises certification of police officers.

Immediately before being named interim chief, Poole was a sergeant with the Norris department. He also has served as a detective on the force.

The Norris Police Department includes the chief, an investigator and four additional officers.

Ogburn, who only took over as police chief on May 13, was suspended in late August and resigned from the position on Sept. 6 when faced with dismissal over the allegations.

An investigation report written by Hackler said that Ogburn, 42, was found to have submitted a fraudulent document to the Tennessee Law Enforcement Training Academy outlining in-service firearms training by three Norris police officers.

The state has given all three of the affected officers waivers that allow them to keep their certification despite the mix-up over their firearms re-training, Hackler said.

Ogburn had been a member of the Norris department since 2015, but was not in an administrative position that required dealing with the officers’ recertification until taking over the chief’s job.