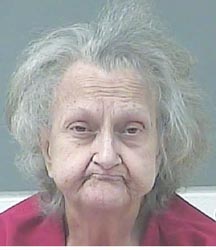 Pecola Duncan, 72, allegedly stabbed her husband, Harold Duncan, in the chest at their Dutch Valley home.

Anderson County Sheriff’s Office said in a release that when deputies confronted Pecola Duncan, she appeared to be in a “cheerful mood” and “unfazed” by the events.

Sheriff’s deputies were sent to the Duncan home Friday evening to investigate the report of a stabbing.

According to the report the towel was “soaked.”

Harold Duncan told deputies that his wife stabbed him in the chest while he was “napping on the recliner.”

The wound and blood loss appeared to be life-threatening and Duncan was transported to the University of Tennessee Medical Center.

Blevins and Presson made contact with Mrs. Duncan inside the home.

She told deputies she stabbed her husband after he “attacked her and dragged her down the hallway.”

Neither deputy, the release said, noticed any signs of a fight in the home and did not see any marks or injuries that would indicate a struggle.

Mrs. Duncan directed the deputies to the kitchen where the knife was found.

Just prior to taking Mrs. Duncan to jail she asked if Harold had died.

Before the deputies could respond she said, “I hope he did.”

Pecola Duncan is in the Anderson County Detention Facility for attempted first-degree murder with no bond.

There have been no further updates on the condition of Harold Duncan.

The case is still under investigation.