Downpour causes erosion, lane closings on Lewallen Bridge, but one could be re-opened Wednesday 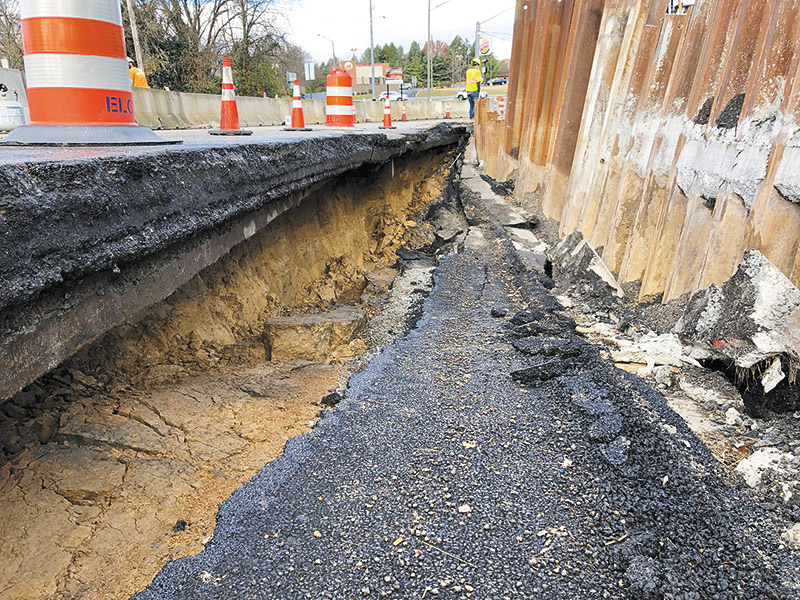 Heavy rain caused erosion on the north side of Lewallen Bridge, resulting in two lanes on the bridge being closed.
Some relief is coming – possibly today (Wednesday) – for the traffic jams of the past four days on the Lewallen (Green) Bridge on Clinch Avenue leading to and from South Clinton.

Erosion caused by heavy rains Friday and early Saturday caused a collapse of the east side of the southbound approach to the bridge from Charles G. Seivers Boulevard, forcing the state to shut down two of the four lanes, and limit traffic over the bridge and its approaches to one lane in each direction.

Emergency repairs were begun Monday morning, and the Tennessee Department of Transportation expects to reopen one of the southbound lanes today, giving southbound traffic two lanes, but plans to keep the bridge to one lane for northbound traffic until repairs are completed, Clinton City Manager Roger Houck said.

“What happened is that all the rain washed out the dirt up under the edge of the road, causing it to cave in on the east side where northbound traffic comes off the bridge,” Houck said Tuesday.

“They have been working 24 hours a day since Monday morning to shore up the road, and plan to have it stabilized by Wednesday afternoon so they can reopen two lanes going south and one lane north,” he said.

“They had to make some repairs there about six weeks ago, and thought they had it repaired,” he said. “But I was called at 7:30 Saturday morning and told about the new problem.”

Houck said the rain gauge in his back yard showed just how much it had rained.

There are no problems with the bridge itself – it’s still in good shape, Houck said.

“What eroded was the roadway leading up to the bridge structure,” he said. “The bridge had nothing to do with it, and the bridge is structurally sound.”

Crews working to build the new bridge just to the east of the Lewallen Bridge “had driven some metal pilings to pour footings for the new bridge, and water got under those,” Houck said. “Now, they’re pulling those pilings up, moving them over, and filling in under the roadway where it’s solid.”

Houck said he had an emergency staff meeting Monday morning to “put in a plan to deal with traffic delays” in case of an emergency situation, so emergency vehicles could get through the traffic jams that might occur.

Because of the reduction to one lane going south, the two left-turn lanes from westbound Charles G. Seivers Boulevard to the Lewallen Bridge have also been reduced to one, as have the straight-through lanes from Main Street feeding onto the bridge. Orange cones are in place to redirect the traffic.

The new bridge is scheduled to open to traffic by November or early December 2020, Houck said.

Then the Lewallen Bridge will be demolished, with the entire project expected to be completed by June 30, 2021.

“We’ve been dealing with this project about four years,” he said.

The city decided early in the project not to accept the state’s offer to buy the Lewallen Bridge, which opened in 1940, to maintain it as a pedestrian bridge or as a “historic ruin,” Houck said.

A third option – relocating the bridge – was deemed not to be practical, Houck said.

“It’s riveted and would have to be taken apart piece by piece,” he said.