Mavs get Hall of Fame win over Loudon 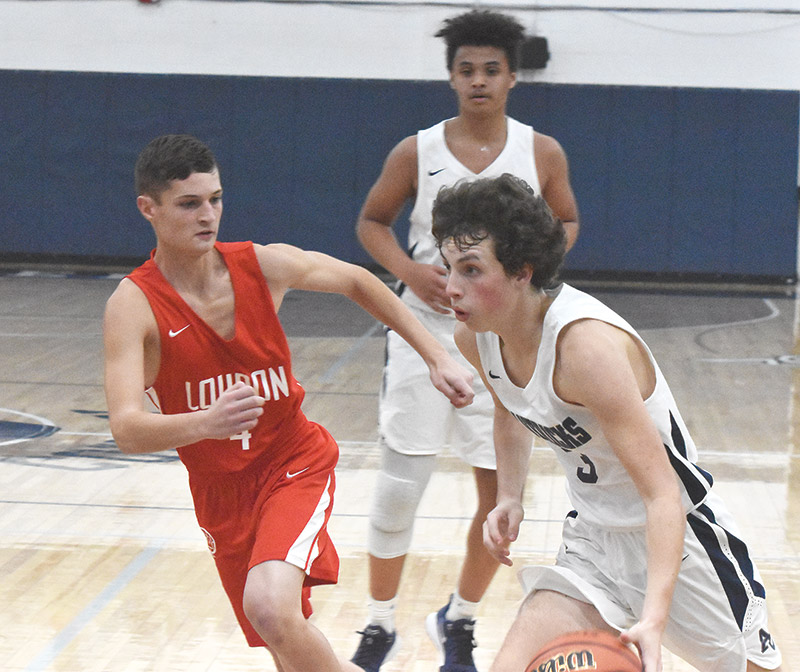 Carter Jett rushes around a Redskin player for a layup. (photo:Collin Riggs )
The Mavericks hosted Loudon on Tuesday, Nov. 19 for a “Hall of Fame” preseason tilt.

The Mavericks finished 72-41 for their first win after losing twice to the Redskins last year, during both their season opener and during their Christmas tournament.

The Mavericks showed a strong opening against the Redskins, finishing with a thirty-point lead. That being said, the beginning was much closer than it might appear from the final score, with the Redskins staying on the Mavericks’ heels. At the end of the first quarter, the Mavericks only lead by two points (12-10), and it wasn’t until midway through the second quarter that they pulled away from the Redskins in earnest, finishing 33-23. As the game progressed, the Mavs would further increase that lead, outscoring the Redskins every single quarter.

The Mavericks outdid Loudon in field goal percentage, going 50-percent to Loudon’s 26-percent. Anderson County also had a higher successful three-point percentage, going 44.4-percent to 23-percent. Other notable stats from the night were Anderson County’s 16 personal fouls, 31 defensive rebounds, and 13 steals, while notable stats for Loudon were 10 offensive rebounds, 13 deflections, and a single block, all stats where the Redskins came out ahead of the Mavericks.

The two-point field goals made by the Mavericks vastly beat out the Redskins, scoring 21 out of 39 attempts to Loudon’s eight out of 29, showing a much, much greater shooting accuracy.

Derek Wallace, the head coach for the Mavericks, said the game went as well as could be expected.

“We had three football players for a day before our first game so couldn’t run a lot of plans and stuff,” said Wallace, “but it went about as good as it could. They figured it out and played well together. We’ve really grown. They played hard, with a lot of emotion and a lot of energy. Even if it was just two to three minutes at a time, they’re working themselves into shape. Connor Martin was outstanding, and the energy that Stone (Hatmaker) and Anthony (White) brought was something we needed.”

“Near the end, a couple of guys started subbing themselves with the guy they’re platooning with. They were matched up, and they started looking at each other instead of me for a sub, and that’s really taking ownership of the team. That’s a key after losing so many seniors and that’s really starting to happen.

Still, Wallace says there’s always room for improvement, and he identified some areas he’s confident the team could be better at.