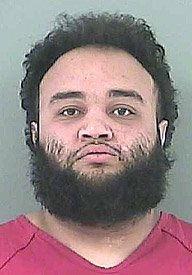 DERRICK HAYES
Derrick Hayes, 26, of Knoxville was arrested in early January on charges stemming from a Nov. 26, 2019, shooting on Defoe Road in Andersonville.

Hayes was arrested by agents of the Smoky Mountain Fugitive Task Force.

He was taken into custody at an apartment complex in Knoxville.

Hayes is charged with especially aggravated robbery, aggravated assault, and theft of property.

The task force was assisted by officers with the Knoxville Police Department and detectives from Anderson County Sheriff’s Office.

“The Smoky Mountain Fugitive Task Force did a great job locating our suspect,” the sheriff said.

“The work their men and women do is nothing short of amazing.

“A big thank you to KPD for their assistance on this case,” Barker said.

“Our detectives did a great job of investigating this incident and identifying the suspect.”

Hayes is being held at the Anderson County Detention Facility in lieu of a $130,000 bond.