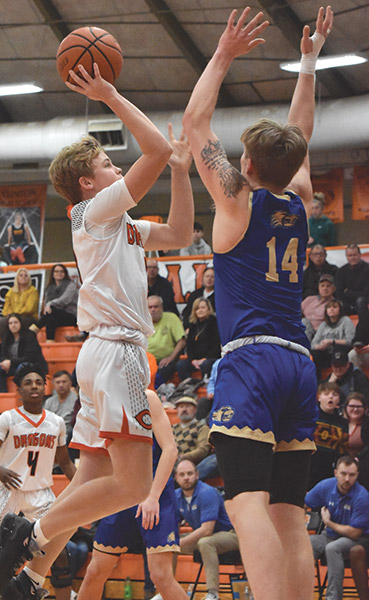 Trace Thackerson shoots against Karns.
Clinton powered through despite sick players to show Karns who was boss.

The final score was 69-41. Clinton hosted Karns for a rematch on Tuesday, Jan. 21. The rematch came after the last game at Karns where Clinton barely squeaked by the Beavers in overtime after a tense back and forth. This time, though, Clinton came out swinging, scoring 23 points in the first quarter to Karns’ 11, gaining a stiff lead they held onto for the rest of the game.

The results could have ended much differently, as the Dragons were missing DeMarcus McKamey, their power forward and center, and before the game started, three more players reported feeling sick.

One doesn’t really appreciate just how well the Dragons played until they take a peek at the stats. The Dragons finished the night with an effective field goal percentage of 68-percent to the Beavers’ 42-percent. They made 12 three-point shots, and all five free throws. In total, their points per possession ended at 1.4.

Add the shooting stats to their 31 rebounds (21 defensive, 10 offensive) and it paints a clearer picture as to how one-sided the game actually was.

The Dragons did come away with more fouls by the end of the night, finishing with 13 personal fouls, while Karns only pulled eight.

Jackson Garner and Trace Wandell had a breakaway night, with Garner leading the team with 18 points and Wandell following close behind with 16. Both sunk four treys each, and Garner came away with two steals and four assists. Evan Winchester came away with 10 points, and added seven rebounds and six assists.

Chris Lockard, head coach of the Dragons, said he was happy with the match.

“We were all sort of battling a little bit of cold and flu stuff, but I was shocked and happy with our performance,” he said. “I was sort of expecting an all out war, but we came out and shot great. We were seven for eight at the three-point line in the first quarter.

We just got an early lead and kept it through the first half, then Trace Wandell went absolutely nuts in the third. Lane Harrisson really stepped up in Demarcus [McKamey’s] absence, too.”