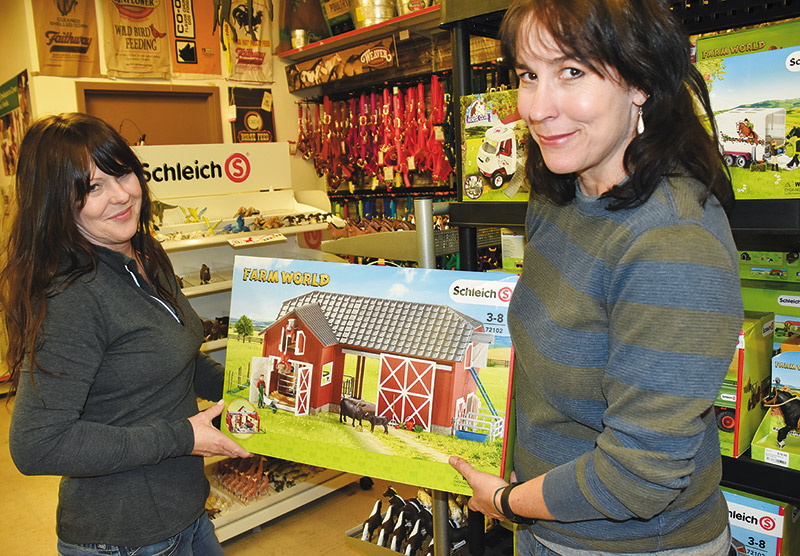 Jackie Kite, left, and Michele Hoefer, salesclerks at the Anderson Farmers Co-Op, hold a Schleich farm playset at the store's display of animal toys from the 85-year old German company. (photo:G. Chambers Williams III )
Some people call them toys, others refer to them as “collectors’ items.”

But to Michelle Hoefer and Jackie Kite, salesclerks at the Anderson Farmers Co-Op in Clinton, they’re just a lot of fun.

They’re referring to the store’s newly expanded line of the popular miniature animal figures from the famous German toymaker Schleich.

The finely detailed and realistically colored animals stand from about an inch to four inches tall – depending on the critter – and are made of a semi-hard rubberlike material.

There is such a wide variety of characters available that the local co-op can’t carry them all of them. But there are dozens of different ones now in stock in a new display the two women have set up in the east end of the store.

“We’ve got farm animals, wild animals, fish, mythical creatures, sea animals, birds, even some dinosaurs,” said Hoefer, who, along with Kite, talked the store management into letting them build the display and order a large stock of the figures.

“We love them,” Hoefer said of her family, which used to operate a local dairy farm. “Our kids grew up on them, and they’re so durable.”

Hoefer brought her kids into the co-op when they were young to let them browse through the Schleich toys, but she said the toys are now getting hard to find.

Besides the individual animal figures, there also is a variety of playsets that range from barns and farmhouses to tractors and hay wagons. Each set comes with its own animals, and prices range from about $40 to $100. The animal figures individually start at $2.99 and range as high as $9.99 for most farm animals, or to $24.99 for a big dinosaur.

“The playsets are precious,” Kite said.

Hoefer said her two daughters were always partial to the farm animals. As with most toys of a collectible nature, Schleich constantly introduces new characters and retires older ones, she said, adding: “They’ve been in business 85 years.”

According to the company’s website, “At Schleich, our main objective is to give children exciting and educationally valuable play that spurs creativity and imagination, while supporting their development.”

Schleich sells more than 60 million of the toys worldwide each year, the company said.

“We always tried to get the new arrivals,” Hoefer said. “There is a big catalog that shows them all. The quality is incredible. The only one my kids ever destroyed was a bull – they cut off his horns with a nail clipper.”

Hoefer said she put the co-op’s big order of the toys together in early January, and they came in last week. She posted a photo of some of them on Facebook, and lots of people have come in to see them already.

“The boss has been good about letting us order what we wanted,” she said.

Horses are the biggest sellers in the Clinton store, she added. There is a large variety of equines, from small ponies to big stallions.

“The kids just love them, but so do some adults,” Kite said.

Some of the cutest ones are white pelicans with big yellow beaks, and some of the exotics, such as pandas, sloths, giraffes, monkeys, parrots, otters, turtles, beavers and seals, she said.

“My kids liked to take them down to the creek to play,” she said. “They get kids off of their iPhones.”