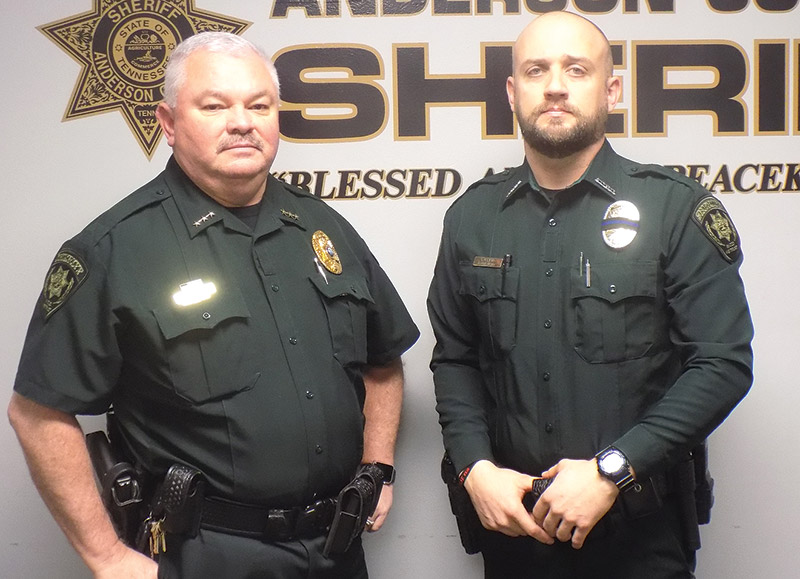 Anderson County Sheriff’s Department Assistant Chief Deputy Robert Sexton, left, and Deputy Kory Blevins recently provided assistance in the immediate aftermath of a baby’s birth near Ciderville. (photo:Fred Strohl )
Police officers perform all types of duties during their daily routines, but you don’t hear often about them assisting in the aftermath of the birth of a baby.

That was the case recently when two Anderson County Sheriff’s Department deputies did just that along Clinton Highway near Ciderville Music.

Deputy Kory Blevins and Assistant Chief Deputy Robert Sexton responded to a 911 call from a woman whose pregnant daughter was riding with her in the vehicle as they were racing toward South Knoxville and the University of Tennessee Medical Center around 8:30 a.m.

The baby, a girl, decided she was not going to wait any longer as the mother gave birth in the car. Blevins was dispatched to the scene, and Sexton was sent as a backup officer.

“I was working at Claxton Elementary School when I received the dispatch,” Blevins said. “I got to the scene in about 30 seconds and the baby had been born. I immediately tied off the umbilical cord and got some blankets to keep the baby warm. I also got the car warmed up because the doors were open when I arrived.”

Sexton, who worked for many years as an emergency medical technician in Knox County, assisted Blevins once he arrived. Sexton has some experience with emergency childbirth procedures from his days as an EMT and said Blevins did everything correctly in this spur-of-the-moment situation.

“Other than the fact the baby was born in the car, everything else went fine,” Sexton said. “There were no complications and the baby seemed healthy, but we were glad when the ambulance arrived about six minutes later.”

Sexton, who has a combined 41 years’ experience as an EMT and police officer, said emergency childbirth assistance is not a subject that receives much attention during training.

“They talk about it maybe five minutes at the (police) academy,” said Sexton – the father of two adult children and the grandfather of two.

“We are going to add this to our training curriculum moving forward.”

Blevins, the father of two children ages 10 and 8, was able to visit the baby and the mother later that day. The family has requested to remain anonymous.

“I took the baby a little pink pig stuffed animal and she was healthy with pink cheeks and weighing about seven-and-a-half pounds,” said Blevins, who has worked for the Sheriff’s Department since 2012.

“Everything turned out great,” he said.

When the excitement started that morning near Ciderville, Blevins and Sexton had already worked about two hours into their 12-hour shifts.

After the ambulance departed with the mother and baby for the hospital, the two officers returned to their regular responsibilities.

“We responded to the call and when our work was done, we went back to what we do throughout the day, answering the calls as they come in,” Sexton said. “As police officers, that is our job every day.”