Dragons make up for loss against Panthers 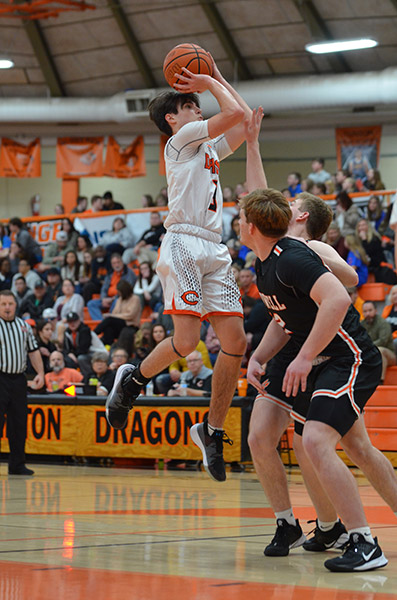 Clinton’s own Jackson Garner shoots against Powell (photo:Collin Riggs )
In a nailbiter of a game, Clinton beats out Panthers in long-awaited rematch.

The Dragons hosted Powell High School on February 4th for a rematch after their hard loss to the Panthers in overtime back in December. The Dragons won 56-50.

The first quarter was a good indicator for how heavy the fight would be between the two teams, with Powell scoring 20 points and Clinton squeaking by with 21. For most of the first quarter, Clinton actually lagged behind, with Powell taking an early eight point lead. It wasn’t until the very last moment of the first that Clinton took the lead, only to lose it again midway through the second quarter. It wasn’t until the third quarter that one team finally pulled away as Clinton pulled a strong lead that they held on to until the end.

Stat-wise, Powell made double the baskets of Clinton, making 18 to Clinton’s nine, and while Clinton made four more treys than Powell, a large part of their overall score came down to free throws, where they went 17 out of 19.

Jackson Garner continued his streak of strong performances, finishing with 24 points under his belt, including four assists and five rebounds across his 34 minutes of playtime as well as a steal. Behind Garner, Lane Harrison finished with a respectable eight points and Trace Wandell brought up the rear with seven.

Dragon lead-man Evan Winchester was noticeably absent from the game, but Demarcus McKamey, after missing several games due to illness, came out swinging. Trevor Bryant finished with one of everything, 1 offensive rebound, one defensive rebound, one steal, one block, one deflection, one assist, and one basket.