“We played the way I’ve been wanting us to play...” 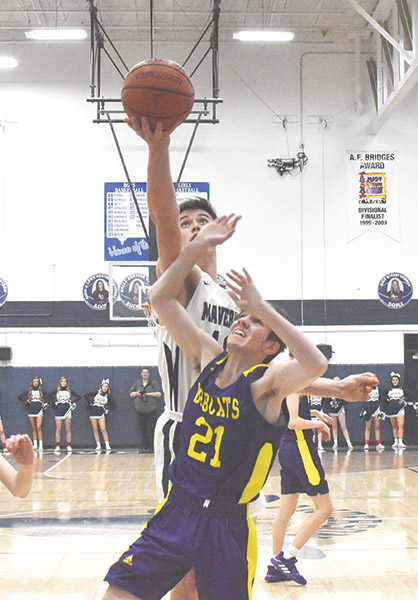 Luke Lowry jumps over an Oliver Springs player for a defensive rebound. (photo:Collin Riggs )
Anderson County beat the crud out of Oliver Springs for their senior night and homecoming festivities.

Only one quarter during the entire game did the Bobcats come out ahead of the Mavericks, that being the fourth quarter where Oliver Springs managed 14 points to Anderson County’s eight. Unfortunately for the Bobcaats, it was too little too late and that six extra points didn’t do much in closing the 43 point gap they entered the fourth quarter with.

Anderson County dominated in everything but turnovers, unfortunately even coming away with 17 personal fouls to the Bobcats’ measly eight. The Mavericks came away with an Effective Field Goal Percentage of 57-percent and made nine treys. The Mavericks also finished with an impressive 32 defensive rebounds and eight steals.

Connor Martin was the lead scorer for the night, with 20 points under his belt, as well as a deflection and a steal. Under Martin, Eli Varner came in second, with 13 points and eight rebounds, as well as two steals.

Some Mavericks who haven’t gotten much playtime this season also got some time on the court, including Zach Firman, who played for the very first time for the Mavs, managing seven points and a steal in his seven minutes in the game.

On the Oliver Springs side, Bryson Marler tried his hardest to keep the Bobcats in the game, shooting for eighteen points throughout the game, and finishing with two steals and a deflection, as well as three rebounds.

Maverick Head Coach Derek Wallace said the game was a great way to end the season.

“The environment and the atmosphere were both great. Nick Reed was our only senior and we really played for him. We played a really selfless game, trying to get him those looks. We played the way I’ve been wanting us to play all season, where we’re playing for each other.

Lots of points, everybody got to play, and now we’re rested and ready for the next step.”