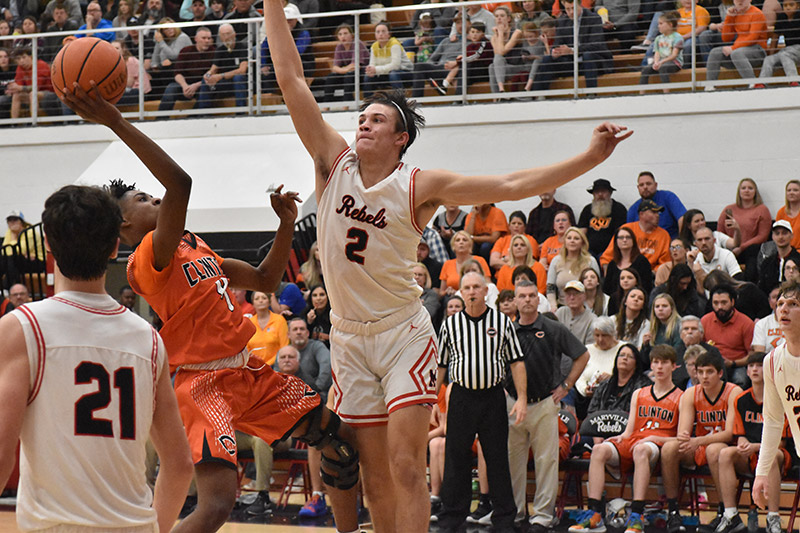 Clinton’s Rishon Bright fades away from a Rebel defender to shoot a rebound during the game against Maryville. Bright will be one of the returning six in next years season. (photo:Collin Riggs )
Clinton hit a wall facing off against the Maryville Rebels on Tuesday, March 3, losing 53-80 to end their run in the regional tournament as well as their season.

It started well for the Dragons, with them winning out the first quarter against the Rebels by a single point. It was a promising start for the Dragons in what promised to be a tough game for the Dragons against the a district champion. Unfortunately for the Dragons, it didn’t last, as Maryville sank multiple threes to gain a sharp lead over the Dragons before the start of the third quarter. That fact and multiple fouls being called against the Dragons in rapid succession left the Dragons demoralized and scattered. The score climbed higher and higher, turning what had been a close game into a decidedly one-sided slaughter. In treys, the Dragons held their own, managing 12 to Maryville’s 13. Where the Dragons really flagged at, though, was in twos, with Maryville making double the amount of two-point baskets at 16 to Clinton’s eight, with Clinton just unable to keep Maryville out of the paint. Adding to that disparity, Maryville received eleven free throws to Clinton’s two. Ultimately, Clinton finished with 12 fouls to Maryville’s five. Lead man, Evan Winchester, played in the game after his injury earlier this season, managing five points in his 13 minutes of game time.

The lead scorer of the game was senior Chase Lockard with 16 points, including four treys, and behind him was Trace Thackerson with nine points, including five assists. Jackson Garner and Trace Wandell tied for third with eight points apiece.

Head coach for the Clinton Dragons, Chris Lockard, admitted the game was tough.

“We had ourself in a really tough position, but I thought we played well, especially early on. I was hoping if we could extend the lead early, we could take the air out of the game. Maryville was a tough match up for us. They would have been a tough match up for anyone. I knew we would have to shoot the ball extremely well to outshoot them, and we played hard, but we just didn’t have the firepower to outshoot them, especially with Evan [Winchester] still injured and Mr. Basketball on their team.”

On paper, the Dragons had a middling season, but they were a team to beat in the district, losing to Oak Ridge by single digits, and showed just how much they matured over the season by beating Farragut in the first round of the regionals.

“We played extremely difficult teams, and I did that for a reason. I think if it was anyone besides Maryville, we could have advanced, but it wouldn’t surprise me at all to see Maryville go all the way to state this year. “

Still, even with the loss, coming away without a regional or district championship, the boys have left their mark on the Clinton basketball program, and the athletic program.

“You always want your graduating class to have an impact on the classes to follow and I think this team changed a lot. I mean, between 2010 and now, it’s been that long since we’ve been in a district finals game. I’ve had some teams along the way really leave their mark on the program, and they’ve gotten really close, but this team really showed the work effort you need to get there. I think this season really left a strong imprint not only on the basketball program, but our entire athletics program. We had so much support from the students and the community and sometimes it takes a great group of kids to do that, to bring a community together like that, and I credit these boys with that.”

The Dragons faced a hard road this year, losing their MVP, Evan Winchester for the last eight games of the season. Despite playing a small amount against Farragut and Maryville, he couldn’t take anywhere near as active a role as the start of the year, and his absence forced his teammates to work harder to compensate for the absence of such a large presence on the team.

“It shows what an impact that Evan had on his teammates,” said Lockard. “The seniors took the young kids under their wing and, with their injured leader sitting beside them, they were one basket away form being able to take that district title home with them. It meant a lot to everyone to see Evan get injured and still be out there supporting us. You know, overcoming adversity is something every coach tries to teach, but seeing them actually do it is pretty special to watch and be a part of. I’m grateful to my players for letting me be a part of it. This one was special for me as a coach; it was special and fun, and I learned things from them. I just hope I made as much of an impact on them as they have on me.”