‘We must act aggressively now’

Physician explains how the Coronavirus works and steps we should take

March 18, 2020 by Dr. William Culbert Special to The Courier News 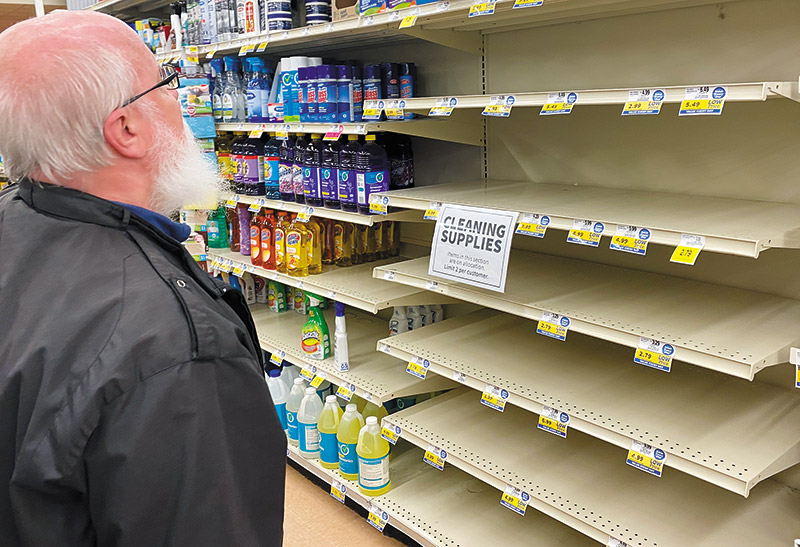 A sign limiting customers to a maximum of two items per person in this section of cleaning supplies -- such as disinfectant wipes -- makes a moot point for a customer at Clinton’s Food City supermarket on Monday afternoon, as the shelves were empty. The store did have a limited supply of toilet tissue on hand, however. (photo:G. Chambers Williams III )
Human coronaviruses cause 10 to 30-percent of all upper-respiratory-tract infections, and until 2002 had a reputation of being inconsequential.

That is when a coronavirus from a bat infected a domestic animal that was already infected with another virus.

Every year, about 8-percent of Americans catch the flu.

It is far more common in the population than the new coronavirus because it is a seasonal variant that existed from the year before. But COVID-19 is more transmittable than the flu with each infected individual spreading it to two or three others compared with 1.3 for the flu.

Because more-severe infections are 10 to 20 times more likely to be fatal than the flu, it has a real potential to become a crisis. Fortunately, 80-percent of infections, especially in children, are mild.

A virus enters a cell by using its chemical “key” to unlock a chemical “door” on the cell. The new coronavirus has a key that lets it into cells in the lower lung instead of like cold viruses that can just get into the upper airways.

Like the flu, it can rapidly destroy two types of bronchial cells. One makes mucus and the other makes hair-like batons called cilia that sweep the lungs of pathogens and debris. This leaves the infected person very susceptible to a secondary bacterial pneumonia.

The vast majority of the 50 million deaths that occurred from the Spanish flu from 1918 to 1920 resulted from bacterial pneumonia.

Most deaths from the new coronavirus result from the speed of infection in a susceptible person that causes an excessive immune response. This leads to leaking blood vessels, flooding of the lungs, and viral migration into the blood with similar reactions in the liver and kidneys.

New interventions are rapidly evolving. After a cluster of pneumonia cases in Wuhan, China, the government isolated the virus and quickly shared the viral genome data. Vaccines are in development that attack the virus in several different ways. Phase one trials that assess the vaccines for safety in humans have accelerated to just 12 months and conventional viral vaccines are now taking just over three months. Oak Ridge researchers have used the city’s supercomputer to explore the structure of various drugs that might block the “key” mechanism of the virus.

For now, the best protections are to avoid putting fingers in one’s mouth, nose, or eyes after touching objects that others touch. Avoid coughing into hands or toward others. Cough into your elbow. Stay home if sick. Smoking paralyses cilia and significantly enhances lower respiratory infections. Seasonal flu kills 12-61K Americans each year and can dramatically increase one’s risk of severe coronavirus infection if exposed. Get a flu shot.

Regular exercise increases the concentration of infection-fighting proteins called immunoglobulins cutting the rate of respiratory infections in half. Staying hydrated will allow immune cells to move to infection sites more rapidly. Avoid going out in cold weather without covering your head, neck, and hands. This will prevent shifting blood flow away from mucus membranes and protect immune function.

Over the last 20 years, the number of people in the world living in extreme poverty has been cut in half and over 80% of the world’s children are vaccinated at least once. Public heath efforts are most likely to break down in these areas and they become incubators for civil war and contagion. The death toll from SARS was exceeded by COVID-19 in a few weeks, but it still cost the world economy $30-100 billion. With seven trillion dollars of wealth wiped from globally listed companies in two weeks by the coronavirus outbreak, expanding public health and ending world poverty are real bargains.

Our response should not be panicked, but instead focused on the accumulation of data that is both accurate and relevant. We should be rapidly expanding free testing for the virus and providing paid sick leave especially for low-wage workers that are less likely to stay home when sick and more likely to be in contact with the public.

The SARS pandemic was ended mainly through strong public health efforts. Even though we are seeing disruption of world travel and supply chains effecting business and creating inconvenience, there is no reason we cannot come out of this crisis relatively unscathed and with much better tools to prevent and fight future pandemics, but we must act aggressively now.