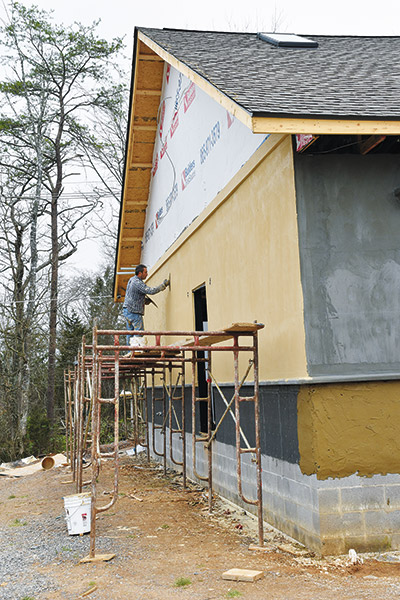 A worker preps the end of a new dental clinic on Andersonville Highway for stucco application on Monday (March 16). Appalachia Family Dentistry will be moving into this building in June from its current location next to the Museum of Appalachia. (photo:G. Chambers Williams III )
Construction is moving fast on the new $750,000 clinic for Appalachia Family Dentistry on Andersonville Highway in the Bethel community, and it has gone from just a block foundation to a fully enclosed building in about two months.

The planned opening date of the clinic has been pushed back by about two months, however, due in part to all the February rain delaying some of construction work, the owners said. The original plan was to open by April 1. Work on the new building began in November, but the actual structure did not start going up until January.

“Assuming that we do not get affected by COVID-19, we anticipate being ready to see our first patient in the new facility June 1,” said Knoxville lawyer Ameesh Kherani, who along with his wife, dentist Sonia Kherani, own the dental practice that now operates further east on Andersonville Highway next to the Museum of Appalachia.

Workers on Monday were putting the stucco finish on the exterior of the building, which Ameesh Kherani said would be “a combination of stucco and stone.”

“The exterior should be complete by the end of next week,” he said Tuesday.

The new clinic sits along Andersonville Highway next to a small strip business center that includes the Norris Animal Hospital.

Dr. Sonia Kherani is one of two dentists who practice at the current clinic location in an old house just west of the Museum of Appalachia. The other dentist is Dr. Gary Fox, who previously had his own dental practice in Clinton.

Appalachia Family Dentistry also has an office in Jacksboro, where Ameesh Kherani also has a law office. He has his main office in Knoxville.

Dr. Kherani has practiced dentistry in the current location for about two years, since purchasing the facility from Dr. Trish Sullivan, who retired. Before Sullivan practiced there, the building housed the dental practice of Dr. Michael Beeler, who moved out after building a new clinic nearby on Bethel Road. The Kheranis’ new building will have a total of about 4,800 square feet, with about 3,000 of that reserved for Appalachia Family Dentistry, Ameesh Kherani said. “We will have about 1,800 square feet of extra space that perhaps we can lease to an orthodontist,” he said.

At the new facility, there will be five “operatories” for patients, and all-new, state-of-the-art dental equipment, Ameesh Kherani said. About $500,000 will be invested in the building, with an additional $250,000 to be spent on equipment and furnishings, he said.

“We’re adding capacity,” Ameesh Kherani said. “Dr. Sonia Kherani and Dr. Gary Fox will be the primary dentists offering treatment, and both have years of experience. We also have an office in Jacksboro that used to be Dr. Nichols’ practice. We’re accepting new patients and can take them at either location.”

The current facility, which is technically in Norris, has a total staff of eight now, but the clinic expects to hire “two or three more” staff members at the new facility, Ameesh Kherani said. The Kheranis own that building, an old house that was converted to commercial use. It has served as a dental clinic for more than 10 years.

“We’ve got some plans we will explore for that building, but not as a dental office,” Ameesh Kherani said.

Dr. Kherani earned an undergraduate degree from Georgia State University, then went to dental school at Meharry Medical College in Nashville, graduating in 2008. Since completing her residency at the University of Tennessee Medical Center in Knoxville, she has been in private practice for the past 11 years. Outside of work, she enjoys spending time with her family – including a 10-month-old son -- and loves nature.

Dr. Fox grew up in Oak Ridge and graduated from Oak Ridge High School in 1971. He went to the University of Tennessee for his undergraduate degree, then went to dental school at UT. He has been practicing dentistry for more than 38 years.