Coaching in the time of quarantine 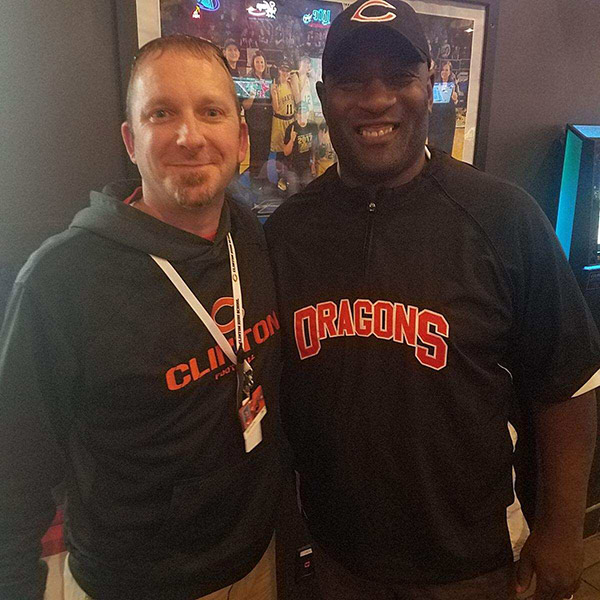 That’s where Darrell Keith is right now – dealing with all three.

Keith was hired in December, after the departure of the previous head coach, Randy McKamey.

He had only two-and-a-half months to get to know his new school and his players before the quarantine started.

“I’d be lying if I said it wasn’t frustrating,” Keith said. “But everything happens for a reason, so I’ve taken the time to do all the small things, such as inventory, getting to know my coaches better, work on a game plan for the season, talk to boosters. Things I would normally be doing on the fly, I can sit down and focus on a little bit more.

“I’ve lost weight, I painted my house, I de-weeded my yard and re-seeded it. Spent some time with my dog and got to know him better. And I got to spend some time with my kids, experience family a little more.”

Keith is staying optimistic, though, and thinks the quarantine could possibly work to Clinton’s advantage in the fall.

“I think a few of [the players] are getting together and working out, but I’d be happy with even 10 percent of them,” he said. “Take Powell and West, for example. They’re a couple years ahead of my program, but I ask myself: How many of their kids didn’t work out during all of this? Muscle mass and conditioning fall off really quickly, so now, when we start this thing back up, we got a chance.”

Speaking of chances, Keith seems to be committed to giving the long-time rivalry between Anderson County and Clinton a chance to settle into something more respectful and productive than it’s been for many, many years. He thinkks it’s a good attitude to have, with the rivalry between the two schools periodically bubbling over in the past few years.

“I don’t hate anyone at Anderson County and we’re not going to do that,” he said. “We should be cultivating and loving on the same kids. We play one game out of the year and it should not be toxic. It should be fun. I’m 53 years old; what kind of man would I be to teach kids to hate other kids?

“So the Dumpster fire that is between Anderson County and Clinton is over. If we can’t come to mutually respect each other, then we should probably get rid of the game. I met the coaching staff over there, and they’re phenomenal. You can’t get mad at someone because they’re doing a good job. We just have to step up our game and get to where we are. I’m not going to promote hate. That’s not what I came down here for. I came down to build a program. I don’t have a problem with Anderson County.”

Speaking of attitudes, though, Keith’s attitude towards football is definitely an old-school one, and he takes a dim view of the current state of the game.

“Football is glorified tag now,” he said. “I want them to have an identity as warriors. I’m a lot like Jim Marlboro, I’m trying to use football to show us back to the way. I think it’s a tough-guy sport and we need some tough guys. We’re not going to out-athlete anybody, but we’re going to try to knock their heads off every day.”

Still, though, Keith doesn’t want that to discourage anyone who’s considering joining the team, saying that, at the very least, they should give it a try.

“Football is a very demanding sport,” he said. “It requires you give of yourself to get anything back. I would tell anybody to come out for two weeks and test your grit, your own personal grit. You either have grit, or you don’t have grit. It’s not about being good at football, it’s about taking on individual challenges every play.

“Every play, in football, you’re going to hit somebody and somebody’s going to hit you. It takes a special type of person to enjoy controlled violence, and football’s a violent sport. We’re not here to put you down if you’re not that type of person.”

Overall, Keith is staying positive about the team’s future, and, with the state attempting to begin reopening soon, his optimism is well founded. The TSSAA has began tossing around the idea of having small group practices of no more than 10 players at a time, and Keith says that will be a challenge.

“If we do that, then every one of my coaches will be like a mini head coach, and I’ve got to really trust them a lot to make sure we’re teaching everyone the same thing,” he said. “Otherwise, there will be conflict.”

Unfortunately, Keith’s optimism about resuming practice and the team’s chances this season are in stark contrast with a dire prediction he has: injuries.

“They’re not giving us our dead period, and you’ve got to get your body in shape to run into people for 10 straight weeks,” he said. “There’s going to be a lot of injuries.”

With all that said, Keith certainly is bringing a different energy to Clinton football, and it’ll be interesting to see where that energy takes the team.

Keith, by his own admission, is more interested in helping the kids than anything else – and maybe it’s that altruistic attitude that will help to turn the team’s fortunes.

All practices will be open practices, when they resume.