Norris will soon have a new hardware store 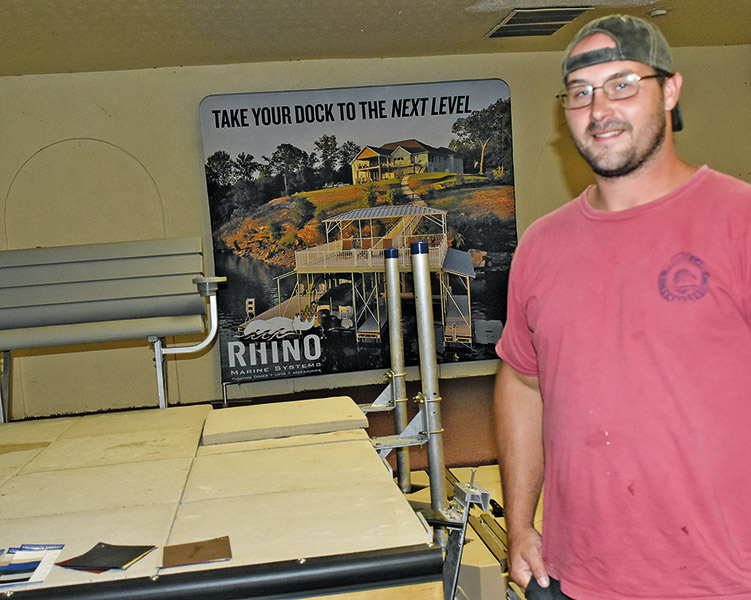 Brandon Boland takes a break from working on his new Docks and More hardware and dock supply store in Norris, which will open soon in the old King’s Steakhouse building on Andersonville Highway. (photo:G. Chambers Williams III )
Norris will soon be getting a new hardware store.

Brandon Boland and his wife, Kayla Pyles, are putting the new store in the building of the former King’s Steakhouse, behind and just to the east of the strip center on Andersonville Highway that houses the Liquor Depot.

The hardware store, which is being set up and stocked by Knoxville’s House-Hasson Hardware Co. – an independent hardware-supply wholesaler, will be part of the Docks and More business that Boland and Pyles have operated from their Andersonville home for the past four years.

Boland said the couple recently bought the former steakhouse to be able to offer a storefront for their dock business and to supply do-it-yourself customers with parts and other supplies for building and maintaining their own docks.

But the building is so large that the couple decided to expand the parts side of the business into a full-fledged hardware store, which will take up about 2,000 square feet of the structure’s total 7,600 square feet.

There will also be an 1,800 square-foot showroom for the pre-fabricated docks that the company sells and installs, Boland said. The docks are customized to each buyer’s specifications.

Boland was the maintenance man at the Stardust Marina for 15 years before starting his own company with his wife.

She still works full time as manager of the Bubba Brews bar and grill at the Beach Island Marina in Tazewell, Boland said.

He said he hatched the idea for the hardware store after his water heater failed at home, and he had to drive “all the way to the Ace Hardware in Clinton to get a $5 part” to fix it.

The hardware store will stock basic plumbing, electrical and gardening supplies and tools, and will be able “to order anything anyone needs and have it here the next day,” Boland said.

House-Hassen will send in a team to build shelves and displays and stock the hardware store, and will provide all the merchandise, Boland said.

Work is already underway on remodeling the building for the dock and hardware businesses, but an opening date hasn’t been set yet because Boland is waiting for House-Hassen’s setup crew, he said.

“They are a little bit behind because some crews are locked out of state with the coronavirus restrictions,” he said.

“We eventually will have a grand opening,” he added. “Our original plan was to open back in February.”

The building has been used as a trucking company and a church since the steakhouse closed when he was a child, said Boland, who has lived in Andersonville since he was born in 1984.

“I found out the building was for sale, and I wanted to buy it because my grandfather used to bring me here for breakfast on Sunday mornings when I was a kid,” he said.

Boland, who has a college degree in computer science, said he likes building and maintaining docks, and wanted to create his own business after working for someone else for so long.

The Norris Planning Commission on June 1 approved a zoning application to allow Boland and Pyles to open their store in the building, which is at 3360 Andersonville Highway.

According to its website, mydocksandmore.com, it is “a family owned company that serves Norris Lake and the surrounding areas.

“At Docks and More, dock building is our specialty.”