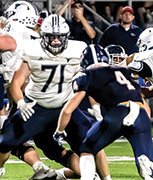 Life doesn’t come with instructions. No one hands out a little book that has rules and protocols and appropriate ways to behave and act or tells you the best used car to buy or how much of a bad thing is really a bad thing and not just sorta bad for you.

If such books were handed out, I was standing in the wrong line at the time.

See, if I had a book telling me which line to stand in to get that book, then I would have a copy of that book. But I didn’t, so I didn’t, therefore I don’t.

With me so far?

There’s no secret decoder ring you put on to see whether you are doing the right thing at any particular time. There’s nothing that came in any box of cereal I’ve ever eaten that offered some kind of code book.

You do your best, I guess. And hope for the best.

Some of it’s easy. Some of it, not all of it, because everything I was taught about right and wrong got a little fudged — a little smeared — as I grew older. The black and whites became shades of gray. Maybe a polka dot thrown in once in a while. Just to keep me on my toes.

I mean, if someone can write something mean spirited because other folks want to wear a mask during this COVID-19 pandemic, is it wrong to answer back in the same mean-spirited tone?

A couple or three times?

See, if you want to give your expert opinion — act like some kind of know-it-all on this pandemic — then I hope you have something like MD after your name, or maybe “Dr.” before it.

There’s no such thing as “at risk” people? That’s “just made up?”

Wow! Look at the brain on this guy!

Why not? It’s not like the internet is going to run out of room for snarky remarks. In fact, I think the more the internet grows, the more asinine, snarky and/or ignorant the posts are.

“Oops, down to my last snarky remark on the internet for a month. Dang, and I had some ideas about those darn Russians.”

Then I feel bad because maybe I was too emotional, lost a little bit of the whatever it was driving me at the time by writing something and losing all that pent up … whatever.

All I’m saying is that there’s a whole chapter, maybe two, in the guidebook to life called “How to internet.”

I need a life handbook or something to clarify that for me.

And did you know that watching only two things on television can be very educational?

That’s my comfort zone. If there were a guidebook to life, there would be a chapter about comfort zones.

I have yet to lose enough IQ points to think reality TV is entertaining. I mean, I graduated second grade with honors so that particular brand of television doesn’t interest me.

Anyway … Gwilym Lee plays DS Nelson for a couple of seasons on “Midsomer Murders” AND he portrays Brian May, the lead guitarist of Queen, in “Bohemian Rhapsody.”

And not only that, John Deacon, who is the bass player for the rock band Queen, was portayed by Joseph Mazzello, who also portrayed Eugene Sledge in “The Pacific.”

See, if there was a book, a sort of guide to life, then I could add that to it. Not so much about Gwilym Lee in particular, or Joseph Mazzello, but that life is full of little surprises that can sometimes make you smile.

Or make you wonder why they make you smile.

You know, whatever works for you.

That would be a long chapter in the guidebook of life explaining that kind of stuff.