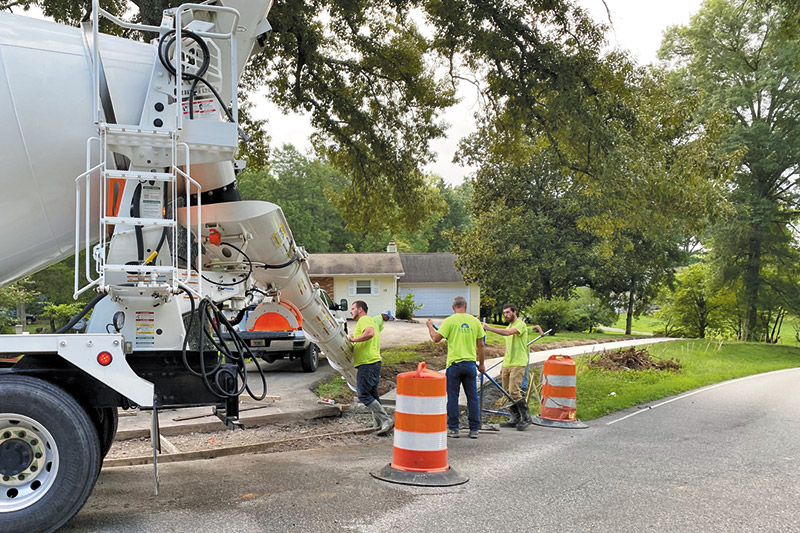 Workers recently poured the last section of the new sidewalk in Norris where it connects to Dairy Pond Road from East Norris Road. The project has now been completed and the sidewalk is open to walkers all the way to Anderson Crossing. (photo:G. Chambers Williams III )
Norris now has a scenic, meandering new sidewalk that runs from Dairy Pond Road down East Norris Road to the Anderson Crossing shopping center, a $347,000 project that has been under construction since May.

During Monday night’s (Oct. 12) regular city council meeting, City Manager Scott Hackler said the project has wrapped up except for a few “punch list” touch-ups that were identified during a walkthrough of the project with the contractor.

“Everything is looking pretty good,” he told the council.

Also on Monday’s agenda was a proposal to look into writing an ordinance to ban tobacco smoking in any city parks that are designed primarily for children to use – which Hackler said primarily means areas with playground structures.

The move comes on the heels of a change in state law that allows municipalities to pass such ordinances, and Hackler said Oak Ridge had enacted a smoking ban for such facilities in August.

Although the Norris council narrowly approved moving forward with creation of a no-smoking ordinance, Mayor Chris Mitchell and Councilwoman Loretta Painter spoke in opposition, saying they believed the city had more important issues to deal with now.

“There are other priorities to address first,” Mitchell said, adding after the vote to proceed that he expected not to hear back on any progress on the ban “for several months.”

Painter voted against the issue, which was merely a motion to move forward with developing an ordinance, which would then have to be brought back for consideration by the council. The makeup of the council will be somewhat different by then, as six people are vying for the five council seats in the Nov. 3 election, and Councilman Larry Beeman, who voted in favor of the measure, is not running for re-election.

The ordinance would be enforced by the police department, but Hackler said police officers most likely would have to personally witness violations to bring charges against violators. The fine for violations could be up to $50.

The council also added $19,050 to the current year’s budget to reflect payment from an insurance company for the 2016 Ford Explorer police cruiser that was totaled in an accident on Reservoir Road just outside the city limits in early August.

Hackler said the city intends to replace the cruiser with a surplus 2017 Explorer the city expects to buy from the Missouri State Police for a total of $25,000. The city had just purchased the 2016 Explorer from Missouri late last year to replace a Ram pickup the city had been using for a cruiser.

The councilmembers were also told that right-of-way acquisition for the Sawmill Road extension to Norris Freeway could begin by early spring, with bidding and start of construction within a year.

When finished, Sawmill Road will come out onto Norris Freeway next to Covenant Life Church, almost right across the highway from Cross Pike Road.

As for the East Norris sidewalk, the project was supposed to have been completed by the end of August, but was delayed mostly because of issues connected with the COVID-19 pandemic shutdowns.

This project represented the last major link in the Norris sidewalk network. It now allows walkers to use dedicated pedestrian walkways through the entire city all the way from Norris Freeway to Andersonville Highway.

Workers began setting out marker flags and stakes in May to outline the route, and then began removing trees, grading the route, and installing drains and other components for the concrete sidewalk.

At Andersonville Highway, the sidewalk crosses the road at the traffic signal, and loops into the parking area of the shopping center. New pedestrian walk signals have been installed at the traffic light, and Hackler said Monday night that he had tested them and found that they were allowing walkers sufficient time to cross the highway.

The sidewalk “zigzags quite a bit,” Hackler said earlier, adding that a few trees were taken out, but that “some old-growth trees” were left in place to have some shade, forming a canopy over part of the route.

One section of the sidewalk closest to Andersonville Highway crosses over right of way deeded to the city from the old Norris Creamery property by Jerry and Ellalyn Crossno, Hackler said.

The sidewalk runs on the east side of East Norris Road, and ties into the existing East Norris and Dairy Pond road sidewalks at the intersection of those two roads. It also runs through the front yard of a house that just recently sold next to the self-storage facility, on the Dairy Pond Road end of the project.

Adams Construction from Kentucky was the contractor.

Still pending in Norris is the Safe Routes to Schools sidewalk project, which is expected to begin sometime during this budget year.

It will run “from the post office around to the bus circle in front of the middle school, and there will be a portion that runs across the back of the library” for access for disabled people under federal ADA rules, Hackler said.

He added that it “will be several months before we start, but it should begin in this new fiscal year.”

“We got a two-year extension on [the grant funding],” Hackler said. “I’m not sure when we will go to bid.”