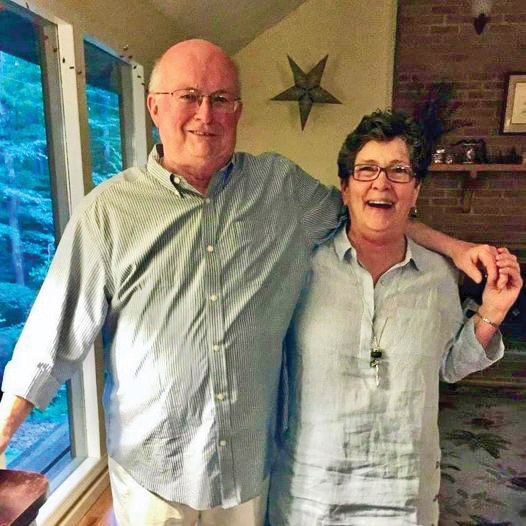 This photo of Jack Mitchell and Loy Johnson was pulled from her Facebook page.
Longtime Norris resident and real estate agent Jack Mitchell, who also was executive editor and publisher of the Norris Bulletin newspaper, died Oct. 27 at his home, eight days after suffering a stroke.

According to social media posts, Mitchell had been under hospice care at his home since leaving UT Hospital on Oct. 22, and passed away in the presence of his wife, Loy Johnson, and his daughter, Meredith.

His wife, owner of Loy Johnson Real Estate next to Archer’s Market in Norris, had this to say on Facebook about his passing:

“Jack died peacefully this morning (Oct. 27) at 5:30 am. His daughter Meredith and I were by his side. I’m thinking of the WH Auden poem: ‘He was my North, my South, my East and West / My working week and my Sunday rest / My noon, my midnight, my talk, my song …’ Our first crush grew into an enduring love for all time. Jack Mitchell, what a lovely ride we had. You will be sorely missed by us all.”

The Facebook post noted, “No service is planned at this time, though we hope to have an edition of the Norris Bulletin soon paying tribute to Jack. If you wish to send a card to Loy, her address is PO Box 1078, Norris TN 37828.”

Norris Mayor Chris Mitchell, who says he was not related to Jack Mitchell, said last week: “Jack made a lot of great contributions to the city in many ways, and will be greatly missed.”

According to a short biography from the Oak Ridge Today website in 2018, and information from Mitchell himself in conversations with this reporter, he moved to Norris in 2004, and took over operation of the weekly tabloid Norris Bulletin in 2013.

He was a retired lawyer, with a law degree from Vanderbilt University in Nashville, where he previously practiced law. He also was a graduate of the Georgetown University School of Foreign Service..