Mavs host Greeneville in Round 2 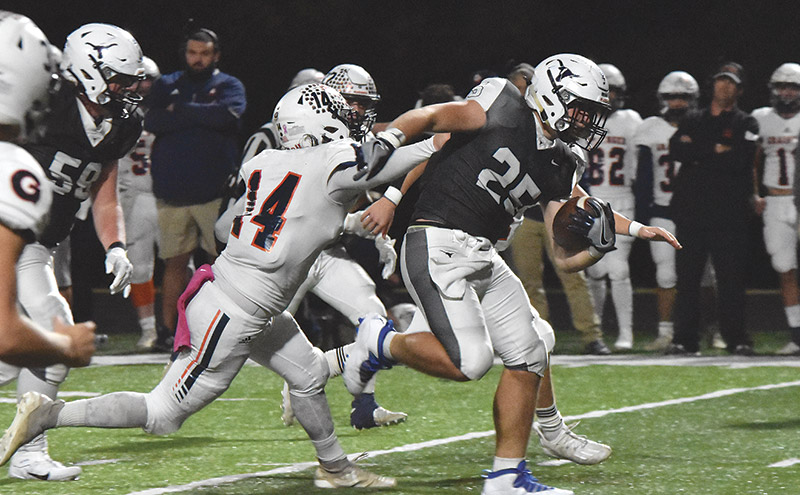 Gavin Noe breaks multiple tackles during a touchdown run for the Mavericks in the sec- ond quarter of the game with Grainger. (photo:Collin Riggs )
A big game this week has Anderson County facing Greeneville heading into the second round of the state playoffs.

Greeneville ended the Mavericks’ dreams of a state championship last year when the Green Devils beat AC 24-7 in the second round of the playoffs. Last year’s Greeneville team entered the game against Anderson County 9-2 though, while this year’s Greeneville comes into the game 5-3, with losses to Science Hill, Austin-East, and Elizabethton.

Greeneville, meanwhile, is ranked 14th in its class, between Creek Wood and Macon County, and 104th in the state, just behind Gibbs.

Still, Greeneville has actually outscored Anderson County when it comes to average per game, edging out the Mavs 43.2 to 42.6.

Talking about whether or not it’s intimidating going up against Greeneville after last year, David Gillum said that’s not how the team looks at it.

“We look at it as motivating,” he said. “This has really got to be our biggest rivalry these last four or five years, not out of location but just sheer competitiveness. They’ve knocked us out the last three years, but last year we felt like we dominated the game physically. We just turned the ball over and made some mistakes on special teams and that made the difference. On high-profile games like this, it’s typically the team with the fewest mistakes that wins. The good news is, though, that it motivates us more for this year. We’re definitely looking forward to it. Had probably the best practice we’ve had all year today from the kids just being so excited. I think this year we’re the better team, but we still have to go out and take care of business. The boys are excited about the opportunity to do just that.”

Gillum also talked about what the team is expecting going into the game, from Greeneville’s play style to how the Mavericks are approaching the game.

“[Greeneville] is spread on offense, but they’re going to run a lot of inside zone and quarterback run game to try and get numbers,” he said. “They pride themselves on being physical similar to us and they have good receivers. They’re a good football team offensively, and defensively they’re very simple but very disciplined. They’re not going to put a bunch of exotic blitzes on you, but they’re going to be physical and not give up big plays. That’s what got us last year. We’re accustomed to making big plays, and we’re going to have to be content taking smaller chunks for a longer period of time and take the big plays when we can get them.”

As for conditioning and stamina, Gillum said it’s not the main concern.

“This time of year, we’ve all played a whole season and we’re in pretty good shape,” he said. “Some of the blowouts we’ve had have kept us from getting four whole quarters of conditioning, but typically most of us 4A teams will end up playing a lot of kids both ways. If anything, it would be more about the fact that we’ve blown so many people out we haven’t played four whole quarters since the South Doyle game, so that would maybe be the only concern as far as the conditioning goes.”

So once again Anderson County faces the Green Devils to advance in the playoffs, and Gillum hopes people will turn out in support.

“ I thought it was a very good turnout for the Grainger game and a very good crowd for both programs,” he said. “It was exciting. I would like to see as many people out as can be. Greeneville always turns out well and travels really well, so we could use all the people we can get.”