Good Samaritans were in ‘the right place at the right time’ 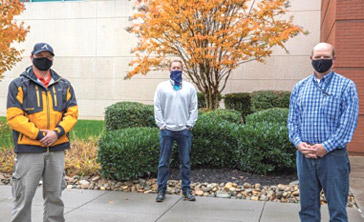 Heroes don’t always wear capes (but they do wear face coverings). These three Y-12ers jumped into action to help a Kentucky man suffering from dementia. From left: Chris Griffis, Mark Butcher and Jack Bolinger.
Most Y-12 employees try to be helpful. Last month, three Y-12ers proved that when they were in the right place at the right time.

Chris Griffis, Jack Bolinger and Mark Butcher were driving near the Horizon Center on Highway 58/95 when they spotted someone in the road.

“He looked to be in distress, and we stopped to see if he needed help,” Griffis said.

The three got out of the car and asked the man if he needed assistance. The man was confused, couldn’t answer any questions, and had a wound on his head.

Bolinger said, “The more we talked to him, the more it was apparent that, at the least, he had a concussion. He couldn’t tell us who he was, where he was headed, or where he came from. He thought he was in Kentucky. He was barely making coherent sentences.”

Bolinger called 911, and the three stayed with the man until the paramedics arrived.

“Everyone is always in a hurry, and I get that, but take time to figure out someone’s situation,” Butcher said. “You should always look to lend a helping hand, especially when you can improve or help someone else’s situation.”

The paramedics took him to the hospital for evaluation. Later that day, Bolinger received a call from one of the paramedics that the man was suffering with dementia and had been missing from Kentucky.

“Sometimes the world we live in seems quite dark; however, there are many more good people in the world than people who would wish to do you harm,” Griffis said. You absolutely need to be aware of your surroundings for the safety of you and your loved ones. Conversely, there are people everywhere who could use some assistance in one form or another. You never know how much a seemingly small gesture can mean to someone.”

“Something that is often missing from people’s actions are doing them from a service perspective, where nothing is in it for them,” Bolinger said. “If you see a need, take action. Never underestimate the impact you can have in someone’s life by a seemingly insignificant action.”

These good guys advise people to look for places where they can help. Griffis said, “It’s vital in our country right now to help those who truly need it.”

Thanks to their help, the missing Kentucky man was soon home.