The ‘Eyes of Texas’ were on Clinton High School Dragons 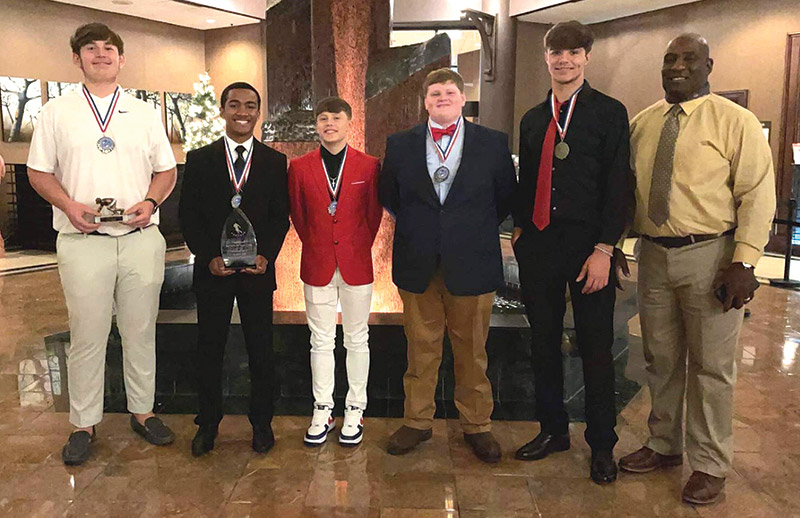 Joshua Keith won the Troy Vincent Award, while Maddox won the Tony Boselli award. All four started for the Blue Team. The game was called in the third quarter due to rain, wind, and dropping temperatures, leaving the final score 12-6 against the Blue Team.

Joshua Keith went 2-8 passing for the game with 96 yards and one touchdown. Phillips carried for 31 yards.

Darell Keith, head coach for the Dragons, said that it was a good experience with good exposure for the school.

“The All-American Bowl is the most academic successful in sports,” Keith said. “I played quite a few freshmen this year, and it’s paying off now because it’s tailored for 15 and under. I had so much film on freshmen and sophomores that I was able to recommend them and get them in here based on their merit.

Keith said that Clinton really showed up and made an impression.

“Our goal was to have Tennessee as a whole dominate,” he said. “Two Tennessee kids dominated. We’re eighth in the nation right now. Tennessee used to have a rule that no player could play in an all-star game. Why wouldn’t you want your kid to compete with the rest of the U.S.? Joshua Keith won fastest man and the quarterback competition. He also received the number one award here.

“Tennessee has very good talent, but I don’t think it’s getting the exposure it needs,” Keith said. “We should be getting more D-1 offers, and I want to spread that exposure. We’re trying to put Clinton on the map. Not even Clinton, though, just Anderson County. I’m just trying to promote East Tennessee as a whole.”

Apart from promoting East Tennessee, Keith said there’s other positives the bowl can bring, including giving Clinton a reputation and helping him to recruit kids easier.

“I’m a businessman,” he said. “I’m not into all the small-town rivalries. I’m just into making kids better and getting them to the next level. I don’t have the time for petty stuff. Life is too precious and I don’t have time for it. I’m on a mission to make Clinton great in the shortest time possible. Kids ask themselves: Why should I come to Clinton? What about it benefits me? What’s hot and not hot? You have to promote your own program and get out and get noticed. You have to make Clinton lucrative.

“They brought me down here to make a difference,” said Keith. “Not just in winning games, but in the culture as well. It helped reinforce what we’re teaching at Clinton. When they can come down here and compete with other kids, it shows that what we’re teaching in the weight room and everything is working and helps them buy in.”

Keith said that things like the All-American Bowl are part of his plan to “make Clinton great in the shortest time possible.”

“I want to be proactive about getting our program to the next level,” he said. “I’m not into building championships, I’m into building individual champions. My investment is in the individual player, and, collectively, they’re winning championships. I’ve seen so many programs just use kids and the kid doesn’t get anything out of it other than lifelong injuries. As a coach, you’re supposed to put the kids in better situations than what you found them in.”

Keith said he thought the players left a positive impresson.

“I thought we represented Clinton really well,” he said. “Wesley Phillips came in second place as fastest man, earning a starting position on the Blue Team. Eric Paige earned a starting position, too. They all started in the game, so that’s a win for me.

“To know that the people of Clinton were watching them really gave the kids the incentive to work hard,” Keith said. “They knew the town was behind them. They have no idea how proud those kids are to stick their chests out and say ‘I’m from Clinton.’ I think after the game, everyone will know where Clinton is. A lot of the players’ films have been requested, and that’s a good thing.”