The Orange and Black struggled late, but won 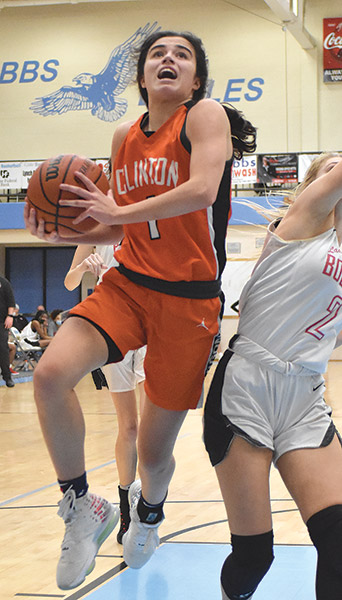 Sarah Burton arcs the ball up and past a Lady Bobcat defender in the game against Central. Lady Dragons won 56-55. (photo:Collin Riggs )
The Lady Dragons traveled to Gibbs High School to face the Central High School Lady Bobcats in a game that Clinton won by a single point, 56-55.

Despite a strong start, the Lady Dragons lost their lead midway through the second quarter, getting outscored by 10 points to start the second half down by three.

The Lady Dragons struggled throughout the second half to regain the lead, but only fell further in the third quarter. It wasn’t until the fourth quarter where the Dragons finally managed to hold Central’s scoring in check (they only scored six points in the fourth) that the Dragons managed to claw their way back, retaking the lead in the final seconds of the game to win.

With such a close game, it’s understandable that the stats between the two teams were split fairly evenly, with Clinton taking the edge in two-point baskets (23-21) while Central took the lead in treys (2-1), and both teams tied for free throws with seven apiece. While both teams tied for free throws, the difference lay in the chances each team got. Central made seven free throws out of 20, while Clinton made seven out of 10, and in a game so close, a higher free-throw percentage could easily have changed the game’s outcome.

Central actually finished with more points per possession, beating Clinton 0.87 to 0.84, while Clinton scored more points off of turnovers (20-9). While Clinton lost out on both offensive and defensive rebounds, it won handily in deflections and steals, beating Central 14-4 in the former, and 16-6 in the latter, contributing to Central’s high number of turnovers for the game (23 total).

Where Clinton did struggle was fouls, with 21 for the night, standing in sharp contrast to Central’s 12, which could have cost the Dragons the game if Central had made even two more free throws.

Sarah Burton led the team with 29 points, almost double the closest person to her, Naiyah Sanders, who finished with 15. Burton finished with five assists and two deflections, as well as an astounding seven steals, while Sanders finished with seven assists, eight deflections, and four steals, showing just what a powerhouse the two players are together.

Senior Jaz Moore brought up third place with 10 points and continued being a steady rebounder for the Dragons, finishing with five rebounds, as well as a deflection and a steal.

Moore’s four blocks were a sight to behold and stripped the Lady Bobcats of more than one sure basket.

The only other player to score for the Dragons was Belle Starnes with two points, but Starnes also contributed with two assists, two steals, and three deflections.

Head Coach Alicia Philips said that the team was tired, but, all things considered, played well.

“Honestly, we were tired and gassed,” she said. “Central played a really good game and they played really well. We were tired, gave up too many offensive rebounds, and confused some of our defensive sets. I was very proud of them, though. It was the first time this season that we were able to come down from 10 and be able to pull ahead. I talked to them with five minutes left in the fourth and told them that this is the time to grow up and that if we wanted to make a run in post-season, we needed to pull ourselves together.

“Still, it was nice to see the defensive plays we’ve been working on really start to come together.”