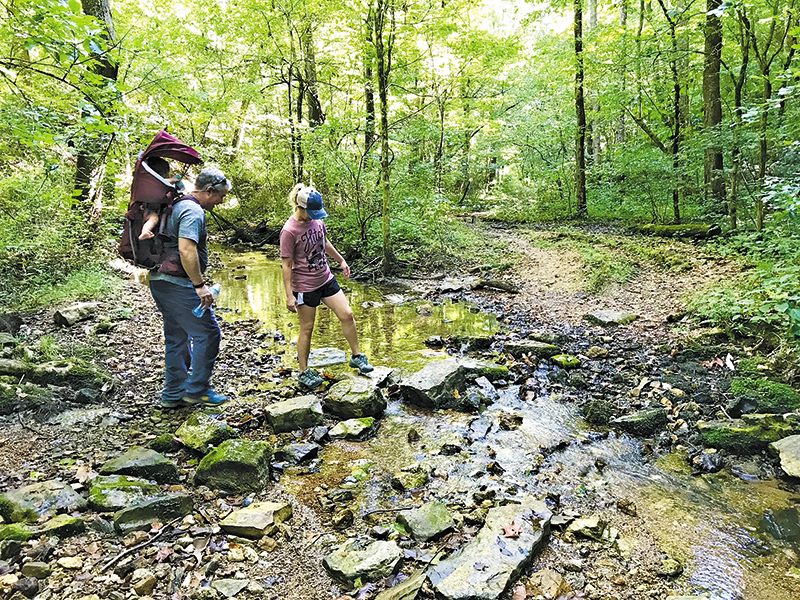 Hikers explore the Norris Watershed, a 2,200-acre forest preserve donated to the city of Norris by the Tennessee Valley Authority in 1953. The watershed offers various recreational opportunities.
Looking for something constructive to do on Good Friday?

The city of Norris invites people to come out Friday morning to join Norris Boy Scout Troop 73 and other volunteers for the annual spring cleanup event in the Norris Watershed, the 2,200-acre nature preserve managed by the city and the Norris Municipal Watershed Board.

The scouts and other helpers will gather at the Norris water plant on Lower Clear Creek Road at 9 a.m. to begin the cleanup, which will conclude at noon with a pizza lunch at the Lions Club Pavilion in Norris, said Allen Hendry, who’s coordinating the event this year.

Hendry, the newest member of the Norris Watershed Board, said volunteers will gather by the pumphouse, where they will be handed trash bags and “grabbers” to pick up trash.

They will then head out along the roads and trails to clean up the discards of the litterbugs who have left their trash behind.

It’s going to be a bigger operation than usual this year, Hendry said, because the usually annual event was canceled last year because of the coronavirus pandemic.

“I’m sure there will be a lot more to pick up than we usually have to deal with,” he said.

The volunteer workers will scour the trails and the roads along Upper Clear Creek, Lower Clear Creek, the Reservoir Hill overlook area, the Carson Brewer Pavilion, and even around Red Hill Trail, he said.

Volunteers will fill the bags, then pickup trucks will come through to collect the filled bags for later transport to the dump, he said.

“We find what people throw out of their car windows, including beer cans, drink cups, paper plates, towels, you name it,” Hendry said. “Pam Turner gets the grabbers from Anderson County Beautification, and we will just pick up everything we find and leave the bags by the side of the road for the pickup trucks to get it.”

Hendry, who had been participating in the annual watershed cleanup for several years before he joined the board last year, said he’s seen some “weird and strange” items left behind on the roads and trails.

“I also have found some geocaching containers, and when I found out what they were, I just put them back,” he said. They are notepads in watertight containers that are used in the geocaching “sport.”

According to Wikipedia, “Geocaching is an outdoor recreational activity in which participants use a Global Positioning System receiver or mobile device and other navigational techniques to hide and seek containers, called ‘geocaches’ or ‘caches,’ at specific locations marked by coordinates.”

People who find them will open the containers and write their names and the date in the notebooks to say, in effect, that “I was here.”

Scoutmaster Dennis Curtin said Troop 73 has been participating in the annual event for years, and hopes to have “six to eight” scouts out for Friday’s event, which was postponed from last Saturday (March 27) because of the rain that morning.

Joe Seeman, a retired Tennessee Valley Authority forester who now volunteers to help with a variety of activities and issues in the watershed, said the annual cleanup event has been going on for at least 25 years.

“It was part of my job for a time,” he said. “TVA transferred the watershed land to the city in 1953, and the memorandum of understanding was that TVA would provide forestry expertise in exchange for using it for research and planting.

“There always was a TVA forester assigned to the watershed until they disbanded the forestry program about 1994. I’ve been a volunteer forester there since then, and I retired from TVA in 2008.”

The Norris Municipal Watershed Board manages the mostly wooded property with the following priorities, the city’s website says:

Rules for use of the trails and roads within the watershed may be found at cityofnorris.com/id242.html.