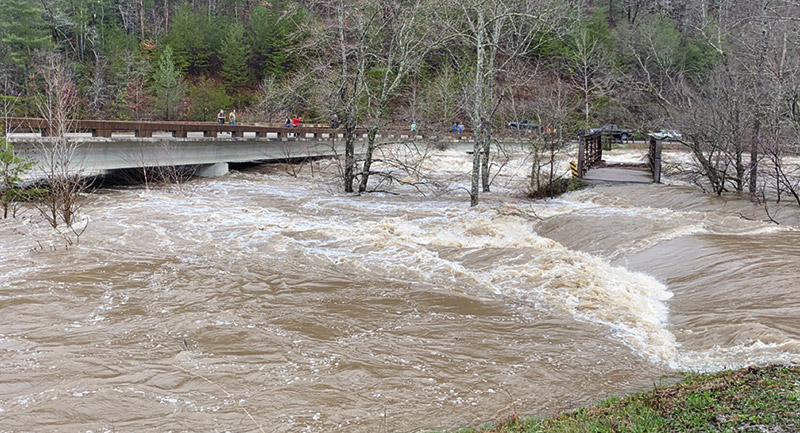 A single section (right) remained in place on Sunday after flooding washed out the rest of the historic Burnt Mill Bridge in Scott County. The bridge had been closed to vehicular traffic, but was open for pedestrian use. Meanwhile, the new bridge (left) remained closed to traffic Monday awaiting inspection for damage from the rem- nants of the old brdige that hit it when the bridge washed out.
Anderson County schools were closed Monday after weekend rains blocked some rural roads with high water, but the county came out relatively unscathed by the storms – unlike some areas just west of here that experienced serious flooding.

“We haven’t heard of any problems resulting from the storms here in Anderson County,” Karen Ooten, program manager for the Anderson County Emergency Management Agency, said Monday. “We were very fortunate.”

The heaviest rains moved mostly northwest through Scott County into Kentucky, sparing Anderson County, but there was some dramatic high water in western Campbell County, according to reports.

No injuries or deaths have been reported from the local storms, officials said.

There were those usual high-water spots in Anderson County where rural roads were closed, though, and even the low-water crossing on Lower Clear Creek Road near the grist mill in Norris was shut down on Sunday because of high water.

Still, some people were getting out of their vehicles, removing the plastic cones, and driving across Clear Creek anyway.

Just to the west of us, in Scott County, the high water was much more dramatic, with the Big South Fork River and other streams in the county reaching flood levels not seen since the 1920s.

“For the record-books: Up to 8 inches of rain fell across Scott County over a 24-hour period from Saturday morning to Sunday morning -- though some areas saw more rain than others,” said a post on the Facebook page of the Independent Herald newspaper in Oneida.

Sadly, one of the casualties of the weekend storms was the historic Burnt Mill Bridge over the Clear Fork River in Scott County. Two of the main section of the bridge was washed out by the floodwaters on Sunday morning.

Built in 1911, the bridge last saw road traffic in 2003, but later became part of the Big South Fork National River hiking trail, limited to pedestrian use only. A new deck was put on the bridge in 2019.

When the bridge washed out Sunday, its debris struck the nearby modern replacement bridge carrying vehicular traffic on Honey Creek Road, near Rugby, over the river. Because of possible damage to the new bridge, it has been blocked to traffic until the Tennessee Department of Transportation can inspect it, the Oneida newspaper reported.

As for the Burnt Mill Bridge, “In 2017, Big South Fork National River & Recreation Area administrators expressed concern that a flood might cause the old bridge — the concrete base of which was determined to be crumbling — to be swept away,” according to a post on the Independent Herald website Monday. “If that happened, they warned, significant damage might be caused to the newer bridge downstream.

“The streamflow on Clear Fork at the USGS water gauge just downstream from the bridge peaked at 36,000 cubic feet per second at 1:30 p.m. Sunday afternoon,” the post continued. “The norm for this time of year is less than 1,000 cfs.”