Orange and Black return seven players to the pitch 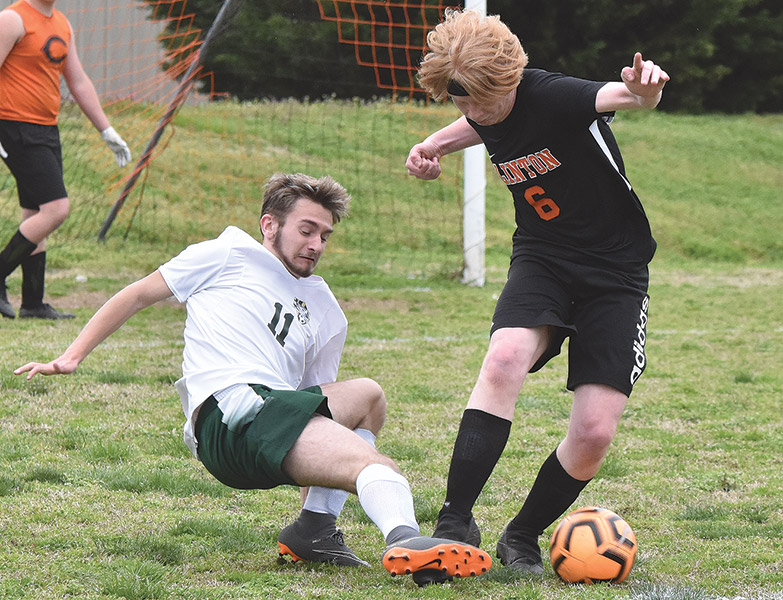 “We had two scrimmages last year and that was it,” Patterson said. “We played Berea in a scrimmage and AC here. After the scrimmage, Coach Roskelly walked across the field and said, ‘Well that’s it. We’re done. They just shut us down.’ That was it. That’s all we got in last year. I had 11 seniors last year that never got to play.

“It was tough, but we rebuilt. We have a good squad with a lot of really good kids.”

Patterson said he’s brought back a strong line of starters from last year, and built up his roster with the help of his new assistant coach.

“I brought back seven returners from last year. I’ve got some very promising, very talented athletes on this team. We picked up several very new guys who have never played, but are very athletic and very driven – which is what everybody wants in a soccer team. We’re going to be strong.

“I’m blessed that I got to pick up Caleb Williams this year as my assistant coach, and he’s been amazing,” Patterson said. “He’s in the building at the school and has been able to recruit a lot of really, really good talent for us. He’s smart, with a lot of knowledge about the game, and he’s a pusher. He doesn’t let them quit. He does a good job, and I’m really glad to have him.”

There are three seniors on the team this year: Nate Murphy, Nico Cronin, and Chris Guerra.

After those three seniors, Patterson said the team is heavy on underclassmen, with more sophomores and freshmen than juniors. Even so, there are still standouts.

“Owen Grey is a standout player. He’s a club kid playing for us this year, and a returner but we didn’t get to play much with him last year. Ryan Bradley is another, along with Jacob Prewitt. Ethan Hunt, too. I’ve got a full lineup this year. Zyrus Dew is another one. He’s another new, new guy that hasn’t played for us ever, but he’s really good.”

Patterson said it’s been rough for the team due to multiple players contracting COVID since workouts began in November – but that luckily, it’s not really led to much contact tracing or serious disruptions.

“When we first started workouts in November, it was tough because we had to split the guys up and we could only have five or six at a time,” he said. “The biggest part has been keeping the guys away from each other. I’ve had some guys that the good Lord just saw fit to make sure they had COVID during a break so it didn’t affect the rest of the team. Fortunately, I’ve not had any guys have contact tracing with the team. I had a couple of guys out for a couple of weeks because they ended up with COVID, but we’ve been pretty blessed that it didn’t really affect us that much.”

More than anything, Patterson said that he’s trying to build a different mentality for the team this year, where they don’t give up. So far, at least according to him, it’s working.

“There’s been a mentality at Clinton High School of, ‘Well, we just can’t do it,’ and that’s flowed from football into basketball and tennis and soccer, and that’s something that my kids see,” Patterson said.

“We took a hard loss to Scott County for our first game, but they fought the whole time, and we’ve been trying to drive that point home that it’s not over until it’s over. They’ve really changed their mentality a lot. Some guys have really stepped up and started making sure they’re boosting their teammates to be like, ‘Hey don’t give up. Let’s keep going.’ That’s definitely a big inspiration to a lot of these guys. I don’t see a lot of quit in any of these guys, and they do a good job.”

Patterson said that he hopes the community will come and support the team, because he believes the kids deserve it.

He hopes they’ll try to support all the kids at Clinton in any way they can.

“If anybody in Clinton wants to come down and check these games out, these kids deserve all the support they can get,” he said. “That’s not just for soccer, either, but baseball and softball, too. Anybody in town that can make it out to these games and support them, it’s well needed and they would absolutely love to see a big crowd. Soccer is kind of one of those sports that doesn’t get a lot of attention, but I promise these guys are committed to it, and they would love to see a crowd.

“Come out and support the Dragons in whatever they’re doing.”