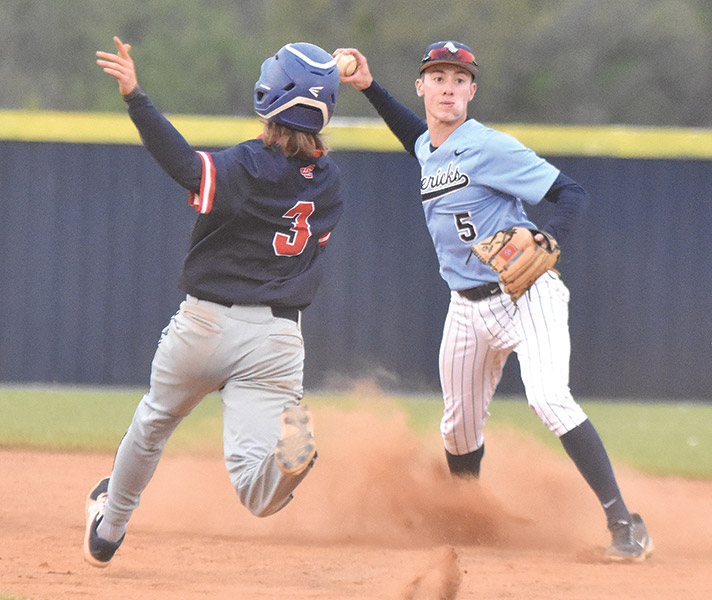 The Mavericks’ Haden Hartgrove throws to first over a Jefferson County runner sprint- ing to second base. (photo:Collin Riggs )
Anderson County’s baseball team defeated Jefferson County on Friday, April 23, in a non-league game, with the Mavericks outscoring Jefferson in the first inning and then playing defense to post the 2-1 victory.

Both teams finished with three hits, with Connor Tackett and Thor Williams batting the two runs in for Anderson County, while Tanner Goins and Haden Hartgrove managed one walk apiece.

Tackett pitched all seven innings for the Mavs, finishing with 17 first-pitch strikes and seven strikeouts along with a WHIP (walks plus hits per inning pitched) of 0.43.

The game against Jefferson came just one day after Anderson County stopped Alcoa’s comeback attempt in the seventh inning to win 8-7 on Thursday, April 22.

Tanner Goins led the team at the plate that game, finishing with five RBIs, followed by Thor Williams with two.

Aydin Bond led the team at the mound for seven innings, with 27 first-pitch strikes and a single strikeout to finish with a WHIP of 1.86.

Cory Stooksbury, head coach for the Mavericks, said he was pleased.

“It’s been great. The energy has been a real separator. It took the cross-town rival coming in to bring out the energy, and we’ve had it since Monday, and they’ve really fed off of it. We just found a way to win.”

Stooksbury specifically mentioned his pitchers from the last two games, Bond and Tackett.

“Connor Tackett was awesome ... but all week, – everybody has just been playing well,” he said.

“We came into the week with five home runs for the season, and now we’re at 11.

“We’ve got six home runs in a week. Batting is going really well.

“Aydin Bond threw [Thursday] against Alcoa for all seven innings, and he just mixed up the speed and threw strikes to give us a chance. It was just fun baseball.”

Stooksbury said that the increased energy has really helped the team.

“I think the dugout has been the X-factor,” he said. “The guys out in the field feed off of the energy, and then when they come back in, they’re jumping right in, and I think that’s the biggest difference for us.

“It helps them to one, loosen up, two, have some fun, and three, just play looser. They’re having fun – and that’s the difference.”