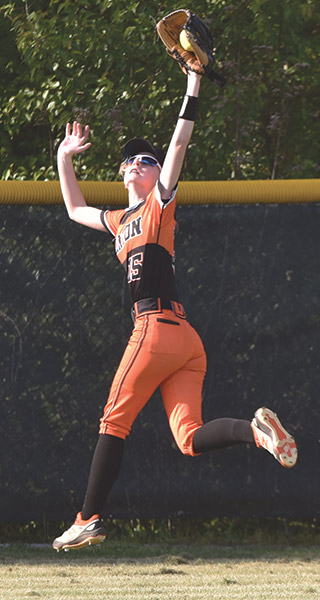 Maggie Irwin jumps and twists to grab a pop-fly in the game against Catholic. The Lady Dragons won 3-2. (photo:Collin Riggs )
The Lady Dragons traveled to Catholic High School on Monday, April 26, and beat the Fighting Irish in softball.

After a close game in which Clinton took the first score, the Lady Dragons won 3-2.

Bree McKamey led on the mound, with the freshman pitcher finding her 100th strikeout during the game. Across seven innings, McKamey held Catholic to five hits and two runs, with seven strikeouts.

After the game, McKamey said it felt great to be a freshman pitcher who’s already thrown 100 strikeouts on a varsity team.

“It’s hard to believe,” she said. “Really, it’s just been about learning to trust that the defense is going to be there, and it’s come a long way since we started. Knowing they’re there helps a lot.”

McKamey specifically mentioned Emma Clevinger and the older players in helping her settle into her role on the team.

“I definitely trust Emma the most in the backfield to take care of things,” she said. “Emma and the sophomores have been the biggest help to me getting adjusted, and I’ve really got to thank them. They’ve played before and they’ve been really welcoming. Other than that, I’d just really like to thank my parents and Coach Sams.”

At the plate, Mc-Kamey, Emma Clevinger, Allyson Benber, Tomi Taylor, and Maggie Irwin all made hits for the Dragons, with the team getting seven hits in total.

Leonard Sams, the head coach of the Lady Dragons, spoke about how the team has really started to come into its own.

Asked what slowed the game down from it’s fast-paced start, where both teams scored early, to four scoreless innings in a row, Sams had some theories.

“We had a couple miscues on the bags that cost us a couple of runs, and we started pressing a little too much right there at the end when we didn’t have to,” she said. “The girls almost got a little too aggressive there towards the end. Overall, though, a win’s a win.”

When asked who his standout player for the game was, apart from the pitcher, Sams had an immediate answer:

“Maggie Irwin, definitely. She made three outstanding catches in left field. She made some outstanding plays out there and some very good catches. She did such a great job. So many great freshmen out here playing, and I can’t say enough about them.”