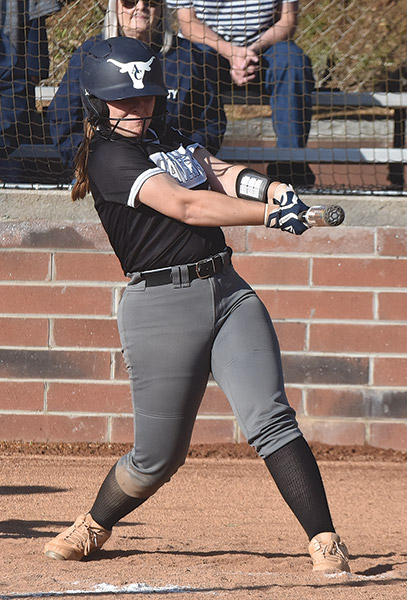 Kaitlyn McKamey sends a grounder out near the end of the Lady Mavericks’ first district game against Campbell County. The Lady Mavs won 15-0. (photo:Collin Riggs )
Anderson County entered the district softball tournament strong on Wednesday, May 5, beating Campbell County 15-0 over four innings to move on to the next round.

Makayla Simmons pitched a perfect game for the Lady Mavs, finishing with six first- pitch strikes and nine strikeouts, as well as a WHIP (Walks plus hits per inning pitching) of 0.00.

In the next round of the tournament, the Lady Mavs dropped to Karns 11-7 after nine hits and seven errors. Reece Simpson, after a stretch of sickness that took kept her from pitching against Campbell County earlier in the week, returned to the mound for the Mavericks, pitching five innings to finish with 13 first-pitch strikes and two strikeouts. Simpson finished with a WHIP of 1.80.

The coach for the Lady Mavs, Allen Russell, spoke about the team’s mixed results so far before the team’s Monday night game against Central.

“We’ve been playing all right,” he said. “That Friday night against Karns was a battle and we just didn’t hit the ball well enough. We made a few errors, but Karns came out and had a couple hits up the middle and put pressure on us. There wasn’t too much we could have done differently. It was just one of those tough games.”

When asked who has been the team’s playmakers for the post-season so far, Russell struggled to name individuals in the face of a team that has performed so well this season.

“Everybody has exceeded my expectations,” he said. “It’s hard. I didn’t know what I was going to get this year from not having a season last year and having no pre-season games. Everybody has done great, though. Lea Elkins hit her first home run of the year on Friday night against Karns. MaKenzie Henderson hit a big three-run jack and broke the school record on RBI for a single season. Reece Simpson has pitched very well.

“They’ve all done great, though.”