Going where no Raider has gone before

A promise to ‘outwork’ everyone paid off for Clintonian Andy Fox 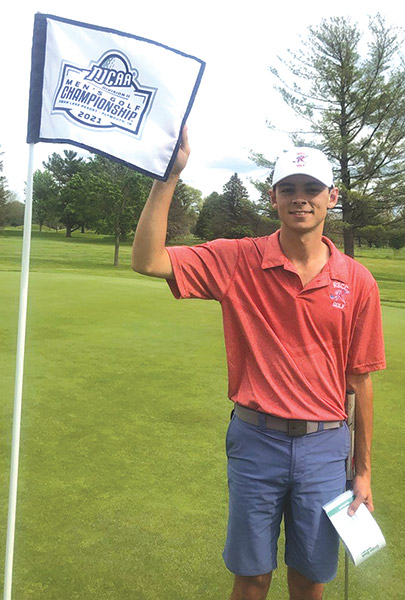 At last month’s Southeastern Regional in Spartanburg, S.C., Roane State sophomore golfer Andy Fox posted a two-day total of 151, which was good enough to qualify for this week’s NJCAA Division II Men’s Golf Championship
For the first time in 41 years, a Roane State golfer has qualified for the NJCAA National Tournament.

Earning the spot at the national tournament marked the first time a Roane State golfer has participated at that level since June 4, 1980.

The best two overall team scores in the regionals qualified for team positions at the national tournament. Then, the five individuals with the lowest scores were also added to the national competition.

After completing his final round at the regionals and returning to the clubhouse, the waiting game began to find out who the individual qualifiers would be. When it was finally announced that Fox had made the cut, it served as a double victory for the sophomore golfer.

Fox, who started as a walk-on golfer at Roane State in 2020, endured a crazy 2021 season due to COVID restrictions, then had to overcome health issues that kept him out of competition early in the season.

Just the fact that he was playing in the regionals was a testament to his comeback ability. His advancement to the national stage reflects his never-say-quit work ethic.

Fox, a Clinton native, had fired a first round 96 on Tuesday, May 18, and improved by 11 strokes in Wednesday’s second round with a score of 85, allowing him to move up five spots on the leaderboard. He was slated to tee off at 7 a.m. Thursday for third-round action.

Raiders Coach Chris Griffin recalls a telephone call he received in November 2019: “Hey, Coach Griffin. This is Andy Fox and I was wondering if I could try out for the RSCC golf team.”

Griffin remembers Fox saying, “I have to tell you, baseball has been my life up to this point, but my dad and grandad have been working with me on my golf swing. They believe that I can make a golfer.”

Fox ended the call telling Griffin, “One more thing, I promise nobody will outwork me during golf practice.”

He has remained true to his promise and excelled at an individual level where few Raiders have gone before.