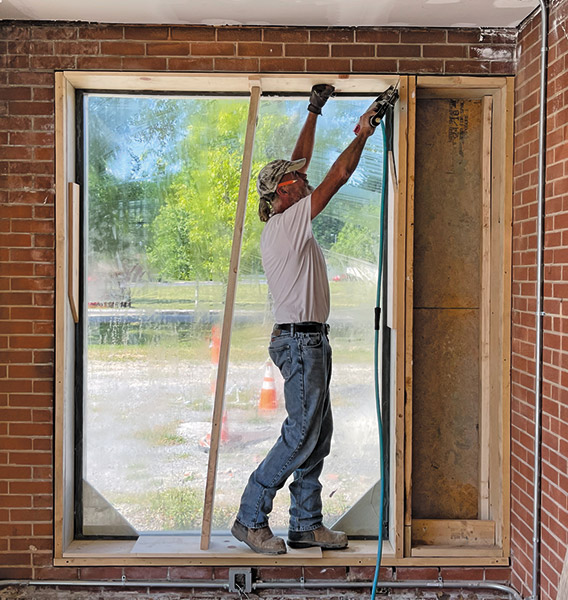 Robert Justice of Powell works on a window installation at the new Norris Market in downtown Norris on Thursday, May 27. (photo:G. Chambers Williams III )
The new Norris Market convenience store could open as early as the July 4 weekend, its operators said this week.

Being built in the former Norris Service Station in downtown Norris, the store is expected to offer gasoline and typical convenience-store merchandise, such as beer and tobacco products, along with freshly-made fried chicken and pizza.

Robert Justice of Powell, who is working on remodeling and expanding the former service station building for the new store, said the owner wants to have the business up and running “no later than July 4.”

He did note, however, that there is still much work to be done inside the building.

The “more” includes the Krispy Krunchy brand of fried chicken, and the Hunt Brothers brand of fresh-baked pizza, he said.

Takeout foods will be available either in the store or from a drive-through window, said Hermani, who owns several similar convenience stores throughout the Knoxville area. The nearest one is the Heiskell Market in Raccoon Valley, he said.

From six to 10 employees will be hired for the business, Hermani said.

Norris City Manager Scott Hackler said the city turned down a request from Hermani to install a diesel-fuel tank that would allow customers to fill up on diesel from a pump attached to the tank.

“It was going to be an above-ground tank,” Hackler said. “People just didn’t want to see it. He had plans to barricade it. But it was going to be dispensed at the pump, so there was a traffic issue. He really didn’t have a good place to put it.”

The city Planning Commission also turned down a request for a variance for a sign to post the gasoline prices, Hackler said.

“He wanted an electronic changeable sign for the gasoline prices, but people said ‘you don’t really have to post your prices,’” Hackler said. “It’s not like people are going to check his prices and then drive several miles to find gas somewhere else cheaper.’

“He did get a variance to change out the canopy for the gas pumps and put a new top on it.”

There is no gas for sale anywhere in Norris now. The nearest is either in Andersonville or near Interstate 75 Exit 122.

The Norris Market will offer the Sunoco brand of gasoline, and there will be one pump available that offers ethanol-free gasoline, Hackler said.

“We wanted to do something the community does not already have,” Hermani said. “We’ve done a lot of research and come up with that as what we should be doing in Norris. It will be me and my wife, Shireen.”

Krispy Krunchy Chicken was founded in Lafayette, Louisiana, in 1989, and has been recognized as one of the fastest-growing convenience store-based quick service restaurant concepts in the nation, and also as the nation’s best fast-food fried chicken, according to web sources. It has more than 2,500 locations in 46 states.

Hunt Brothers Pizza, based in Nashville, bills itself as “an American food chain located in convenience stores, gas stations, country markets, sports arenas, and schools,” with “more than 7,300 locations in 28 states as well as some international United States military bases.” It has a local distribution center in Clinton.

As for the new Norris Market, it “will have a small dining area with TVs and some toys and games for kids when they get off school,” Hermani said. “The kids can sit down and chill and get something to eat.”

“We will have the drive-through window for food, drinks and snacks,” he said. “People can drive through and go back to work or school.”