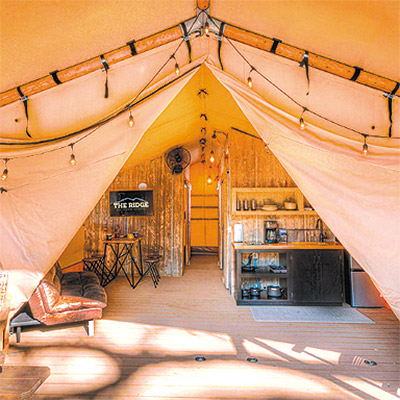 Plans for the park were approved in August by the city of Norris, after the land was rezoned in May to allow the facility on property next to the museum, owned by the founding family of the museum.

“We’re excited to see the project get underway,” said Lindsey Gallaher, who is serving as the Irwin family’s spokesperson for the RV park. She is the granddaughter of museum founder John Rice Irwin, and daughter of Elaine Irwin Meyer, the museum’s president.

Irwin and his family will continue to own the RV park land, but will lease the site to a separate operator, which also has a similar facility in the Sevierville area, known as The Ridge Outdoor Resort.

“We were approached by a friend of ours in Sevierville who is on the board of the museum about creating a campground there,” Mandy Conner said Tuesday. “My husband has been in the campground business since 1992. We went up a little over a year ago and looked at the property, and we fell in love with the museum and the family. We started the process of leasing the land.

“Our goal is to really enhance the museum in Norris,” she said. “And we want to offer a really good camping experience to people traveling in the area. We believe it’s such a beautiful setting.”

Not exactly a traditional RV park in the vein of a KOA facility such as the one just off Interstate 75, Exit 122, in Clinton, the new Appalachia Ridge will feature luxury “glamping” tents, treehouses and tiny homes for rent by the night, along with 100 campsites, according to the developers.

The Ridge Outdoor Resort has standard and premium campsites, glamping tents and tiny homes, but does not have any treehouses, she said.

The two couples opened The Ridge resort together three years ago, and were looking for an opportunity to expand that concept when they got together with the Irwin family, Maples said.

The Ridge’s website (theridgeoutdoorresort.com) notes that “holidays are peak rates” with “a 3-night minimum,” and that RV and glamping-tent rates are for up to four guests each.

Appalachia Ridge would bring the first overnight accommodations to the museum area, along Andersonville Highway in the Bethel community on land that was annexed by Norris about 10 years ago.

The Norris City Council in May approved rezoning the land for the park/campground from S-2 (Scenic Highway District) to general commercial (C-2).

That rezoning covers the address 2819 Andersonville Highway, which includes two tracts comprising about 17.5 acres adjacent to the museum.

The two pieces of property are Tract 132 on the Anderson County property map, a total of four acres, with Elaine Meyer listed as the owner; and Tract 13, part of which would provide the rest of the 17.5 acres for the RV park. But not all of that tract would be used for the park. Owners of Tract 13 are listed on county records as “John Rice Irwin and others.”

The move to rezone the property encountered a stumbling block in April when the Norris Planning Commission rejected the family’s request for commercial zoning, instead suggesting that the city’s S1 zoning class be modified to allow the RV park under a set of strict guidelines.

Then-Planning Commission Chairman Ed Meyer, husband of Elaine Irwin Meyer, abstained from voting on the rezoning, and later resigned from his seat on the commission. The City Council appointed former Councilman Larry Beeman to replace him on the commission during the council’s April meeting.

The City Council overruled the Planning Commission during the April meeting and voted for the rezoning ordinance on first reading, with every council member speaking in favor of the move.

The museum asked for the original move to Scenic zoning after Norris annexed it, to save money on property taxes, City Manager Scott Hackler said.