It’s been a busy week at the net

September 15, 2021 by Ken Lay Special to The Courier News 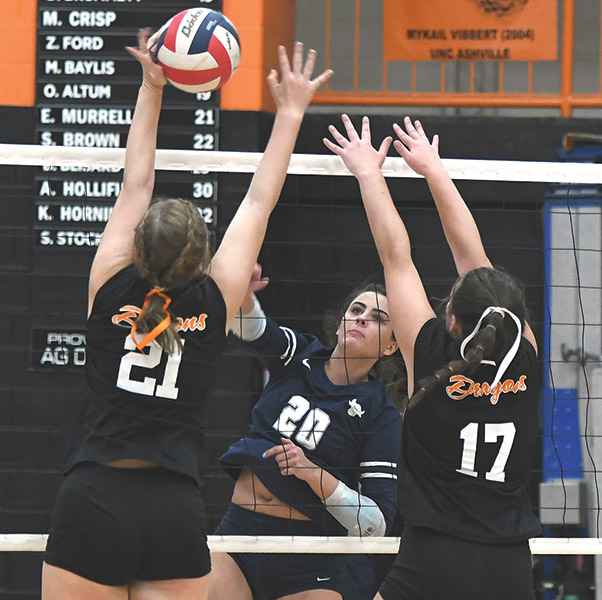 The Lady Dragons also lost in three sets to Stone Memorial out of Crossville. All tournament matches were contested in a best-of-three format.

“They won the Gold Division of the tournament and they are a defending state champion and they got all of their players back from last year except one.”

Johnson is hoping that her young team will learn from its experience in Sevierville, but she’s also hoping that the Lady Dragons will continue to play with the energy and enthusiasm that has them in the thick of the District 3-AAA race.

“I’m hoping that they don’t get discouraged because this was some really tough competition,” Johnson said. “After the Musselman match, I told the players that this is where we want to get to.

“In the past, they weren’t competitive at all, and now, they’re competing.”

The weekend was a rough one, but the Lady Dragons won a pair of league matches earlier in the week.

Clinton outlasted Karns in four sets at home Thursday night. The Dragons claimed 25-12, 25-13, 24-26, and 25-19 victories over the Lady Beavers at Don Lockard Gymnasium to complete a regular-season sweep of the Lady Beavers. The two rivals opened the 2021 campaign at Karns. The Lady Dragons won that match in four sets in northwest Knox County.

Clinton opened the week on Tuesday, Sept. 7, with a 3-0 sweep of the host Lady Devils at Halls.

Meanwhile at Anderson County: ACHS notched 25-9, 25-17, 25-11 victories over the Lady Dragons in Clinton and Coach Jayme Smith said that her team, which has struggled and been plagued by injuries early this season, may be poised to turn the corner.

“We just got one of our starters back last night, and I think that might make a difference,” she said. “We just got Erin Cantrell back from concussion protocol. We still have one starter out.”

Anderson County has enjoyed a bit of success of late, and Smith said that it’s been a team effort for the Lady Mavericks this season.

“Last night (against Clinton), everybody did what they were supposed to do,” Smith said. “That’s the good thing about our team.

“Sometimes, we have girls who have off nights, and other girls step up and pick of the slack. We’ve gotten good play from Jace Braden and Leah Freeman and we got Erin back. Those girls are all seniors.

“We want to be there in October and we’ve worked hard to get there in the past.”

Smith also had high praise for Johnson and the Lady Dragons after Monday night’s match.

“She’s done a good job over there and they’ve come a long way,” Smith said.

“She has a really young team and I think they’ll be really good in the next couple of years.”