September 15, 2021 by Ken Lay Special to The Courier News 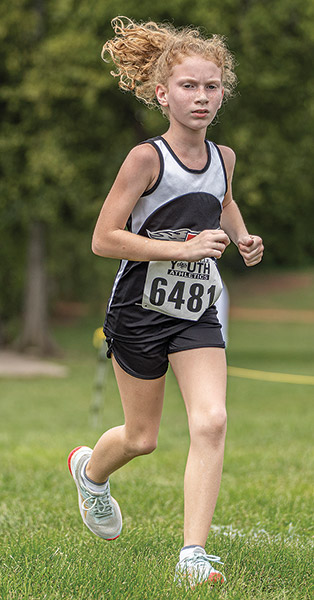 Clinton City Blaze cross country runner Corryn May completed the Cove Lake Cross Country course with a time of 9:29.51. (photo:Tony Cox )
The Clinton Blaze will have a cheerleading squad for the first time during the 2021-22 school year and coach Kaylee Houck has announced the members of the inaugural squad recently.

Pancake Breakfasts: The Clinton Blaze cheerleading squad and dance team will host a pancake breakfast on Saturday at the Apple Blossom from 8-10 am. Cost is $5.

The boys and girls basketball teams will also host a pancake breakfast on Oct. 2 at the Apple Blossom. Cost is $5.

Swimming: Swim coach Mark Majors will have tryouts for his co-ed team on Sept. 20.

Girls soccer: The Lady Blaze will be fielding a soccer team this year and it will be coached by Allison Swanner.