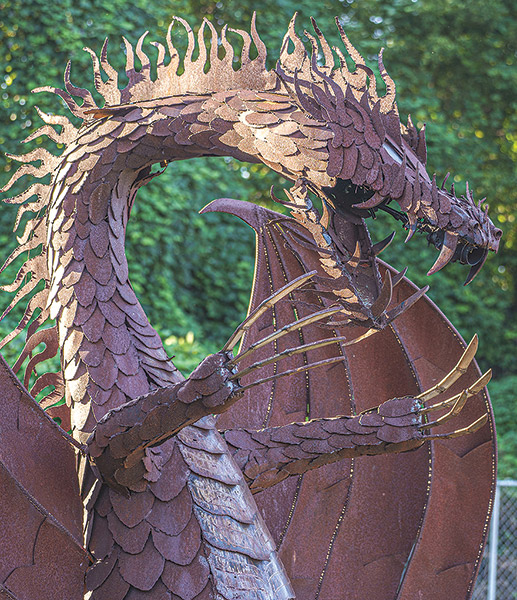 “MIKE THE DRAGON”
You can throw a couple of clichés in here to set the scenario that played out for Pyro Shows in LaFollette.

“It was a perfect storm.”

Or, “No good deed goes unpunished.”

There seemed to be some miscommunication in the process as well.

When the 2021 football season got underway, the pyrotechnic special effects company started catching a lot of heat on everyone’s favorite sounding board — Facebook.

The situation is simple. And complex. And there is a bit of history that runs along the relationship between Pyro Shows and those who didn’t show the company any love at the beginning of the 2021 season.

Let’s start with the history.

About seven years ago the company was approached by a group representing Clinton High School. It was about the same time “Mike the Dragon” became part of the CHS football experience.

The metal dragon would breath fire when Clinton scored a touchdown. The problem was it was just a little illegal to do.

Jump to about three years ago when a new set of CHS officials and boosters approached Pyro Shows about lighting up the dragon.

The situation that shut down Mike the Dragon the first time still existed.

“We love the concept,” Lansden Hill, president and founder of Pyro Shows, said in a recent interview. “What could be better?

“Our message is: We want to do anything we can to support any group — whether it’s a church, whether it’s a school, whether it’s a government, whether it’s the private sector — whatever it is that wants to entertain their patrons, their fans, the spectators with special effects, we’re for it. We just have to follow the rules.”

“The initial contact was about doing fireworks; we talked about some possibilities there,” Pyro Shows’ James Woods said. “Put up everything like we do with Anderson County (High School).

“The next contact was specifically about the dragon,” he said. “There had been an effort to get it going again, to clean it up.”

But that’s not what Pyro Shows does.

To get Mike the Dragon fired up again, there has to be a certified device — whether that’s created by someone, or if it comes already certified from a factory.

At that time, Woods said there was a company in Florida that manufactured those kind of devices — specifically for shooting flames — and they came certified. The cost, at the time, was $7,500 per unit.

Somehow that got re-arranged that Pyro Shows wanted $7,500.

“We don’t do that (certify devices),” Hill said. “We don’t have the capacity to do that. A professional engineering form, or a factory-made unit certified by the state is the only way to do that.”

And as for who is going to be in charge of lighting up the dragon?

“Whoever performs some function has to have a state of Tennessee exhibitor’s license,” Hill said. “That’s $1,000 a year (charged by the state).

“They could certainly buy their own exhibitors’ license. … Go through state training and get their license,” he said. “You also need $1 million in liability insurance. I don’t know who would be responsible for that.

“Some people got a licensed operator confused with certification and then it was Pyro Shows was going to come down and do this, that, and the other, and Pyro Shows doesn’t have the authority to certify anything,” Hill said.

So how did Pyro Shows end up being the target on Facebook?

“Obviously, there was good intentions,” Hill said of the desire to light up the dragon.

But there needs to be some work done to get everything legal.

“They’re good, meaning people, passionate about their cause,” Hill said. “But there’s a lot of things you can do in your back yard that you can’t do in the public arena.

“And when you start doing anything in front of the public, it brings all the codes and regulations and statutes that come from the state of Tennessee or the county fire marshal, or the county, or the city of Clinton.”

Hill said, “We don’t have anything to do with that certification process. We live by it, but we don’t create it. It’s the state of Tennessee looking at the engineer’s plans.”

Hill said he’d love to do a demo for Clinton High School that might work with Mike the Dragon.

The company has a “fog” machine capable of throwing out a 40-foot stream of smoke (even color-tinted smoke if you wanted) that the NFL’s Tennessee Titans use.

Hill said it’s also used by the SEC and the ACC.

“We would be glad to work with anybody to do anything,” Hill said.

He noted that, “Nobody had ill intent,” when throwing shade at Pyro Shows.

It was, he said, a misunderstanding, but he wants it known that: “We’re glad to support any school that wants to do anything to promote the energy, the loyalty, to their school.”