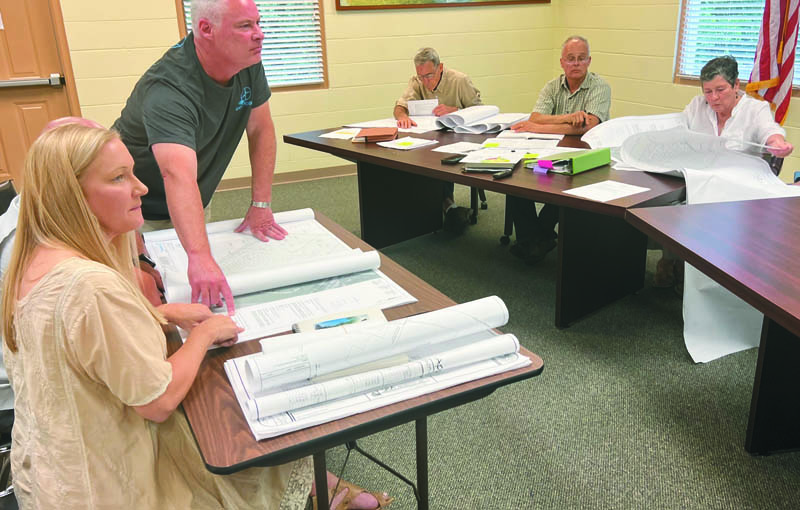 Mandy Conner, left, co-owner of the planned Appalachia Ridge RV park next to the Museum of Appalachia, and Mark Watson, construction manager, present revised plans to the Norris Planning Commission on Monday. Commissioners included, from left, Chairman Joe Fee- man, Councilman Will Grinder and Loy Johnson. (photo:G. Chambers Williams III )
Work could begin soon on construction of the buildings and other amenities of the campground/recreational-vehicle park planned for property adjoining the Museum of Appalachia, after final plans for the facility were approved Monday night.

After presentation of revised plans for the RV park by the developers, members of the Norris Planning Commission voted to allow the project to proceed.

But the owners still must obtain a building permit from the city before work can start.

“I recommend approval,” she said.

Mayor Chris Mitchell, who also sits on the Planning Commission, said after the meeting: “I’m excited for the success of their project.”

The commission approved the revised plans on a unanimous vote.

The RV park already is three months past its originally planned opening date, with grading of the property the only work done on the site so far – nearly a year after the official groundbreaking.

But Mandy Conner, one of the Sevierville-based developers of the park, said last month that they now hope to have the facility, which will be called Appalachia Ridge, open for business early next summer.

She led the presentation to the Planning Commission on Monday night, along with Mark Watson, a former Gatlinburg building inspector, who has joined the project as construction manager. Also on hand from the ownership group was Mike Hale.

Grading on the 17.5-acre site just to the west rear of the Museum of Appalachia on Andersonville Highway in Norris began last September, but work seemed to be at a standstill for the past several months, with a large expanse of bare, red dirt visible as visitors enter the museum property.

“We have not stopped working on it,” Conner said. “It seems like we haven’t been working on it, but we have. We got the grading permit, and the grading process did take longer than our projected timeline. We were working with local utilities to access water, sewer and electrical service.

Conner said besides delays in the grading work, the death of museum founder John Rice Irwin earlier this year caused a delay in getting one of the land leases approved. Irwin was the listed owner of one of the two tracts the RV park is being built on.

The owners are Mandy Conner and her husband, Jimbo Conner, along with Mike Hale and his wife, Jessica Hale. The four are already partners in The Ridge Outdoor Resort in Sevierville, after which the Norris campground will be patterned.

Mandy Conner said after last September’s groundbreaking that the group chose the name Appalachia Ridge to signify its connection to the adjacent Museum of Appalachia and the existing RV park they own in Sevierville.

Initial plans for the park were approved in August 2021 by the city of Norris, after the land was rezoned in May to allow the facility on property next to the museum, owned by the founding family of the museum.

“We’re excited to see the project get underway,” Lindsey Gallaher, who is serving as the Irwin family’s spokesperson for the RV park, said after the groundbreaking. She is the granddaughter of the late museum founder John Rice Irwin, and daughter of Elaine Irwin Meyer, the museum’s president.

“Our goal is to really enhance the museum in Norris,” she said. “And we want to offer a really good camping experience to people traveling in the area. We believe it’s such a beautiful setting.”

Appalachia Ridge would bring the first overnight accommodations to the museum area, along Andersonville Highway in the Bethel community on land that was annexed by Norris about 10 years ago.

The Norris City Council in May 2021 approved rezoning the land for the park/campground from S-2 (Scenic Highway District) to general commercial (C-2), over objections of the city’s planning and zoning board, which had initially denied the request.

That rezoning covers the address 2819 Andersonville Highway, which includes two tracts comprising about 17.5 acres adjacent to the museum.

The two pieces of property are Tract 132 on the Anderson County property map, a total of four acres, with Elaine Meyer listed as the owner; and Tract 13, part of which would provide the rest of the 17.5 acres for the RV park. But not all of that tract would be used for the park. Owners of Tract 13 were listed on county records as “John Rice Irwin and others.”

The City Council overruled the Planning Commission during the April 2021 meeting and voted for the rezoning ordinance on first reading, with every council member speaking in favor of the move.