RV park was apparently built without planning and zoning approvals 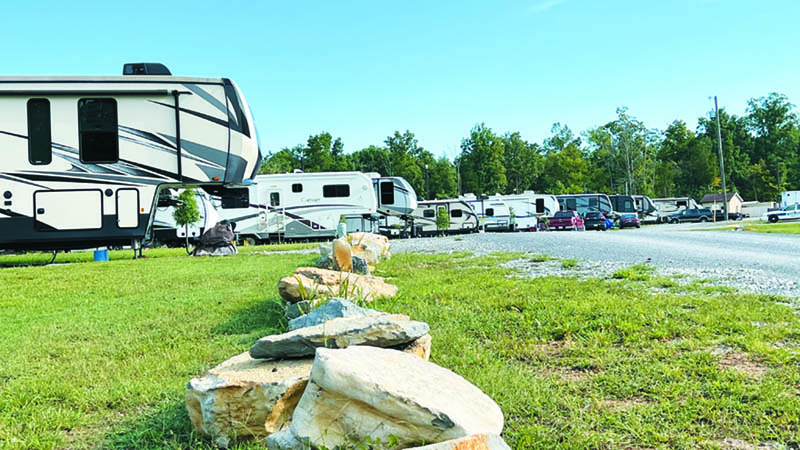 The 16-space Solid Rock RV Park on the grounds of Covenant Life Church in Norris was built without the church first obtaining the proper zoning and planning approvals. The park was near capacity with RVs on Friday, Sept. 9. (photo:G. Chambers Williams III )
Norris city officials are looking at taking legal action against Covenant Life Church that could result in an order for the church to remove a recreational vehicle park the city says was built illegally, without city approval or proper zoning.

The church, which sits inside the Norris city limits on Andersonville Highway (Tenn. 61), built and opened its “Solid Rock RV Park” to the public in October 2020 without first getting its property rezoned to allow for such use, and without applying for approval of its plans or obtaining a building permit.

Now, the city has begun taking action that could lead to removal of the facility if the church does not apply for rezoning and submit plans that are acceptable to the city’s planning and zoning authorities and the City Council.

Carl Beaty, who identified himself as a representative of the church, appeared before the Norris Planning Commission last week to inquire about rezoning the land upon which the RV park lies.

But the information Beaty gave to the commissioners about the facility was vague and often contradictory, and no official request for rezoning was filed.

Instead, the city was left with more questions than answers about the church’s construction and operation of the RV park, whose entrance is off Norris Freeway (U.S. 441) just across from Cross Pike Road.

The RV park has 16 spaces on a 22-acre site for motorhomes and camper trailers, along with utility hookups. The sites are advertised on the church’s separate website for the facility (cl.life/solid-rock-rv-park/).

Beaty told the commissioners repeatedly that the RV park was not intended for public use and was a “ministry” of the church intended primarily for use by visiting ministers and evangelists.

“We don’t have anything there that we rent out nightly,” Beaty said.

But the RV park’s website makes no such restrictions on renters. The website’s main page advertises:

“Enjoy the beauty and nature of the Clinch River and Norris Lake by staying at the newly opened Solid Rock RV Park located at 2875 Norris Fwy Andersonville, TN 37705, which is next to Covenant Life Church just past the Museum of Appalachia. Take exit 122 off I75 then its only one mile to the campground. We feature all pull thru camping spots, electricity, water, and dump services for each site.”

There is a button to click to make reservations.

Beaty conceded to the Planning Commission that “some people pay to stay there,” but continued to insist that the park is “part of our ministry … not a for-profit thing.”

Yet new Planning Commission member Alex Monroe told fellow commissioners during Beaty’s presentation that he and his family found accommodations at the RV park online when they were visiting the area in preparation for their recent move to Norris, and there was no indication the church’s facility was different from any other commercial RV park.

Beaty also initially told the Planning Commission that visitors to the RV park were not allowed to stay long-term (beyond 30 days), yet later mentioned that some visitors had stayed there six months or more.

“We have had some asylum-seekers,” Beaty said, who stayed “rent-free” until they “got their visas.”

That was after the commission noted that it appeared as though some long-term campers had built porches and other amenities onto their RVs.

City Councilman Will Grinder, who also sits on the Planning Commission, told Beaty, “The community has some issues with the RV park just being dropped in there without any permits.”

Beaty suggested that the church would like to have the property rezoned from its current P-1 designation – professional use that does not allow for any residential use – to a commercial C-2 designation, which would allow for an RV park.

Commissioners cautioned Beaty that the church might lose its nonprofit tax-exempt status on the property if such a rezoning were to occur. The church currently pays no property taxes on its campus or facilities.

“We do not plan on expanding beyond [the] 16 spaces,” Beaty said. “It’s all about ministry. It’s not there to make money.”

Baldwin told Beaty that the church “must submit an application” for the rezoning, which “must be approved by the Planning Commission, then go to the City Council” for final approval, which would also include a public hearing.

“My plea is for a little tolerance, patience, mercy,” Beaty told the commission. “Help us through this problem we have created. I need to let church leadership decide what [they want to apply for].”

No action was taken by the commission, pending further action by Covenant Life Church officials on formal requests for rezoning and planning approval, which would require submission of a proposed site plan for the park that has already been built.

The Norris church is part of Covenant Life Church Inc., a non-denominational, evangelical megachurch in Gaithersburg, Maryland, which was established in 1977. It has multiple branches in several U.S. states and foreign countries.