Mavs dish out a ‘Devil’ of a time

Greeneville forced to play the Maverick game, and it doesn’t go well 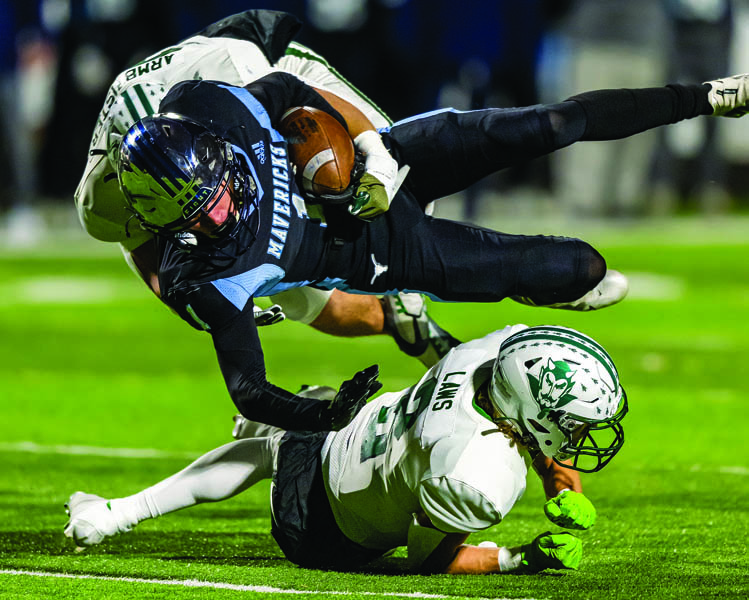 The Mavericks erased an early deficit against Greeneville to punch their second ticket to the semifinals in team history.

After falling behind early, ACHS scored 38 unanswered points to keep its perfect record intact with a 38-7 victory over previously top-ranked Greeneville on a chilly Friday night at Anderson County.

The win means that the Mavericks (13-0) will practice on Thanksgiving Day, and it enabled them to make a state semifinal appearance for just the second time in the team’s 49-year history.

But things didn’t start well for Anderson County, which fell behind 7-0 when Greene Devils quarterback Brady Quillen threw a 19-yard touchdown pass to Zac Chrisman in the first quarter, and it seemed that a familiar narrative would unfold as Greeneville (12-1) had ended the Mavs’ season four times since 2017.

“They gave us a little trouble,” Anderson County Head Coach Davey Gillum said. “The big thing was we came back out and answered.”

It’s not the first time Anderson County has been down early in a game this season.

But after Greeneville’s initial points, AC’s defense would stifle one of the most-potent offensive attacks in the Volunteer State en route to reaching the semifinals since Gillum was a player at the school.

The Mavericks’ defense would force the Greene Devils into five turnovers and hold the visitors to just 255 yards of total offense on the night. Anderson County would pull even when senior quarterback Walker Martinez connected with Bryson Vowell on a 3-yard scoring strike.

The Mavericks would take the lead by the end of the opening frame when Nick Moog recovered a Greeneville fumble and rumbled 42 yards for the score. Eli Davis made the hit that caused the turnover.

Chris Nelson would add the extra point to make it 14-7.

“We got the turnover and then they had to play from behind and that’s not the game they want to play,” Gillum said. “We’re so big and physical, and when they play more our style, from behind, that’s not their M.O. That’s ours. They’re not that huckleberry.

“If they’re able to control the clock, it’s a different game,” Gillum said. “Maybe a seven-point game, or two touchdowns.”

In the second stanza, Martinez hooked up with Vowell, again, this one from 14 yards out, to give the Mavericks the 21-7 advantage they enjoyed at halftime.

ACHS’s defense forced another Greene Devils turnover in the third quarter, and the Mavericks cashed in on the miscue when Nelson converted a 38-yard field goal, making the score 24-7. The Mavericks would extend their edge to 31-7 on a 35-yard pass from Martinez to Eli Braden.

Martinez, the Mavs’ senior field general, was 24-for-30, amassing 334 yards and accumulating three touchdown passes. ACHS was held to just 62 rushing yards on the night, but closed the scoring on a 9-yard dash by Gavin Noe in the final frame.