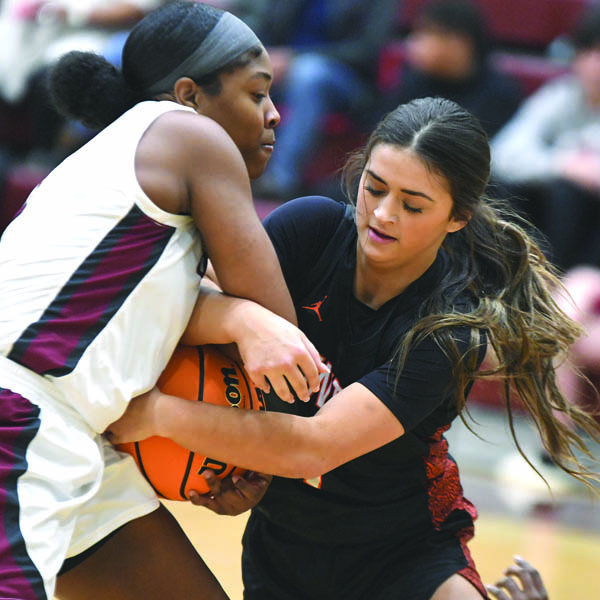 One of Clinton’s talented freshman, Addi Gamble, ties up the ball handled by Oak Ridge’s Ze’Yana Stewart last week when the Lady Dragons traveled to Oak Ridge. The young Lady Dragons learned lessons from that loss for two big wins to close out the week. (photo:Ken Leinart )
For the first time in recent memory, the Clinton High School girls basketball team made the trip over the Anderson County-Knox County line and nabbed a victory at Powell.

“This is Year No. 9 for me (as coach) and I don’t remember ever winning at Powell,” Lady Dragons Coach Alicia Phillips said after Clinton routed the Lady Panthers 60-37 Monday night at the Jeff Hunter Gymnasium. “It’s tough to win over here.”

The Lady Dragons, however, have struggled lately, despite winning their last two games.

“It’s been a rough ride this season, but we shot the ball well tonight,” Phillips said. “We made 11 threes.”

Allie York scored 13 points as she knocked down four 3-pointers.

“We did a good job with trapping,” Phillips said.

The Lady Dragons return to District 4-AAA play Friday night as they make the trip to Anderson County High School to take on the Lady Mavericks (6-10 overall, 1-2 in the district).

Clinton (2-1 in the district) defeated ACHS 53-50 at CHS in December and will attempt to capture the regular-season sweep against the Lady Mavs, who have battled adversity, including injuries and illness all season.

Anderson County has won two of its last three games and was set to host Seymour Tuesday night.

Results were not available at press time.