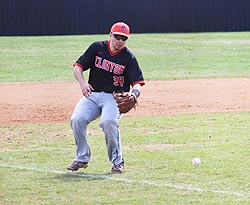 Clinton’s Luke Perez waits on a slow roller down the third base line against Campbell County on Saturday.
The Clinton Dragons fell to Northview Academy by a score of 7-6 in eight innings on a very cold Tuesday night.

The game was originally scheduled to be played in Kodak but was switched to Clinton because of the wet field conditions at Northview.

The Dragons took the lead in the second when Jackson Duncan singled in a run.

Clinton added five runs in the third inning, including a home run off the bat of Blake Sherwood. Luke Perez also singled in a run in the inning and Shea Harber plated a run on a groundout.

Northview scored four runs in the third and tied the game in the seventh to send it into extra innings.

Northview got the win when an error allowed the winning run to score.

Austin Kelly got the start for the Dragons and came away with no decision. He went three innings and allowed one earned run on hits to go with two strikeouts.

Sherwood, went 2-4 at the plate with a homerun and two RBI. He took the loss in relief as he went three innings and allowed one earned run on one hit. He recorded two strikeouts.

The Dragons had seven errors in the game and left seven men on base.

Spencer Byrd, Tyler Davis, and Peter Souleyrette also had hits for the Clinton in the loss.

“We just had a bad night, plain and simple. You make seven errors, no matter who you play, you’re not going to win,” said Matt Byrd, head coach of the Dragons.

The Dragons got back on track Saturday afternoon with a 6-3 win over visiting district rival Campbell County.

The game was originally scheduled for Friday night but was moved to Saturday due to rain.

The Cougars got on the board first with two runs courtesy of a walk, a fielder’s choice, and back-to-back singles.

Clinton added a run in the bottom of the third when Isaiah Murphy singled and later scored on an error by the shortstop.

Campbell County added a run in the top of the fifth to build a 3-1 lead.

The Dragons rallied in the bottom of the fifth. Souleyrette opened the inning with a base hit and Sherwood walked. Davis then crushed a three-run homer to left center to give Clinton a 4-3 lead.

Trey Herrell drew a walk and moved to second on a sacrifice bunt by Perez. Alex Burton then drove in Herrell with a base hit to make it a 5-3 lead for the Dragons.

Clinton added an insurance run in the sixth when Souleyrette doubled and Davis doubled to score him.

Herrell got the start and the win. He five innings and allowed no earned runs on five hits with five strikeouts and a walk.

Burton picked up the save. He pitched two innings, striking out four and walking one.

Davis finished the game 2-4 at the plate with a home run, double, and four RBI.

Souleyrette went 2-3 with a double and two runs scored.

“We’ve got a really young team and we have two starters out sick right now. This was a big district win for us and I’m proud of how they fought back. They battled through adversity and found a way to win the ballgame — that’s the biggest thing,” said Byrd.

The Dragons then traveled to Sequoyah for a 6 p.m. game.

They lost 8-2 in the nightcap.

The Chiefs scored a run in the second, third, added two in the fourth, and four in the fifth.

The Dragons had three costly errors in the game.

Sherwood provided a bright spot for Clinton as he hit his second home run of the season, going 2-3. He doubled as well.

Zack Webber was 1-2 with a double and an RBI.

Clinton picked up a non-district win over visiting Coalfield Monday night by a score of 14-1.

The Dragons went up in the first inning as Perez singled in a run and Webber doubled for an RBI.

Clinton enjoyed a nine-run third inning, which was powered by a double by Spencer Byrd and three errors by the Yellow Jackets.

Perez got the start and the win. He pitched all five innings and allowed no earned runs on three hits and five strikeouts.

The Dragons return to action on Thursday when they host Maryville Christian at 5 p.m. and Cherokee at 7 p.m. They host Lenoir City on Friday at 7:30 p.m. and will host district rival Powell on Monday, March 27, at 7 p.m.