This is important, this is about sports 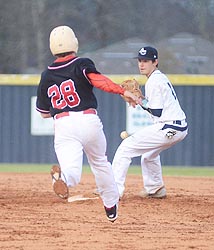 Anderson County’s Jonathan Hodge made up for this bobble on a double play ball Monday night by hitting the game-winning RBI.
This is important.

This is about sports.

We get full of ourselves sometimes, don’t we?

“I am the smartest man alive!”

But it’s hard to get that spark, that inner light within that will tell you that everything is copacetic.

That little inner voice that tells you, “Shake it off, we have time and another inning, quarter, frame, set, whatever … to prove ourselves.”

That inner voice is never on the field getting hit at the line of scrimmage, slapped on the wrist during a shot, catching a guy’s shoe in the knee on a slide at second, or knocked in the boards on an ice rink.

Which, I guess, is good.

You gotta protect the inner voice.

Some of us have “inner voices” that tell us we need to bounce back, or we need to pursue a certain path.

It’s just our conscience telling us we are better than what we believe we are.

Not trying to get all Tony Robbins on you, it’s just the way us mystic witch doctors are.

Other people have inner voices telling them all the answers to the universe are in a gumball machine — just keep pumping in the quarters.

Athletics is not the sure-fire cure to all of life’s ills, but it does give a cornerstone for building a well-rounded life.

So does band, drama, art.

But I don’t know about dand, drama, art and what these activities do for personal growth.

I just know what athletics did for me.

Anyone who has played sports, whether it be a team sport (baseball, football, etc.) or taken on individual contests (tennis, bowling, golf, etc.) can testify that taking part in these activities gives you …

A lot of stuff: Confidence, control, an even keel, respect for yourself and others, and a sense of karma (if you work hard you will be rewarded).

And everyone who has ever played sports had made a mistake, made some kind of stupid play.

Imagine this: You’re up three runs in a baseball game and you bobble a little flip at second base that winds up letting the other team tie the score.

But, because this is baseball (and you have to love baseball), there is a chance at redemption.

It’s for fun — sure maybe a scholarship coule be involved.

I doubt any college recruiter worth his salt will look at the local paper and think, “The Madison Gabeezo said this kid made a an error in a game played Marh 30, so I guess he’s not for our team.”

So us news types don’t say that kind of stuff in print.

We might say, “a bobble in the inning led to a score.” We usually don’t say who made the bobble.

And why choose now to break our (The Courier News) own little unwritten rule?

I’ll tell you why. That player shook it off and came back and played hero.

In the bottom of that same inning he smacked the game-winning RBI.

I consulted with Richard Evans, The Courier News’ sports guru, about whether to mention the bobble in the cutline for the front page photo of this edition.

I’m assuming Jonathan Hodge won’t mind me mentioning the bobble, after all, that didn’t cause all three runs to score and tie the game. It was just part of the dynamics of that inning.

I’m assuming his coach, Ben Downs, won’t call me and chew me out for singling out his second baseman.

Downs is a good baseball coach and as such, he watches over his players like a rabid badger watching over lunch.

I’m assuming quite a bit here and we usually don’t do that either.

But I can’t help it. This is what a great sports story should be.

Especially those of us who have ever put on a jersey, glove, shoulder pads, or carried a hockey stick.