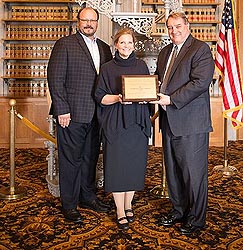 Anderson County was recognized for the development of a temporary campus of the Tennessee College of Applied Technology (TCAT).

The temporary facility will be located in a remodeled commercial facility in Norris and a permanent location will be constructed in the I-75 Business Park in Clinton.

The award was made during the TDDA Legislative Reception held on March 7, in Nashville.

The TDDA is an association of Tennessee’s nine development districts, which are regional planning and economic development organizations.

These policy boards within each District are made up of the state’s 95 Counties and 340 municipalities.

“These awards are given on the basis of nominations from each of the nine development districts and are presented to those local governments and other agencies for special contributions to the improvement of infrastructure systems and/or the quality of life for their citizens.

“This is an excellent example of a cooperative effort by Anderson County and its partners to develop a local educational facility that will provide quality educational opportunities to their constituents for many years to come.” said Terry Bobrowski, Executive Director of the East Tennessee Development District.

“The Rebuild Tennessee Awards highlight and recognize projects from across the State of Tennessee that have had a significant impact on the jurisdictions in which they are located.

“We appreciate the effort that Anderson County has made toward improving its education infrastructure and it is only fitting that they be recognized for their leadership and vision,” said Richard Driver, TDDA President and Lafayette City Mayor.