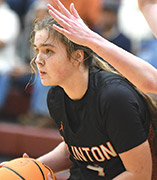 The decision whether to restructure the county’s purchasing department by placing it under the purview of the county’s finance department has been a topic of discussion among county officials for two months now.

After much discussion, Anderson County Commission last week unanimously voted to approve placing the oversight of the purchasing department under the finance department.

Commission originally voted for the motion at the County Commission meeting last month, but the motion failed with eight commissioners voting, “yes,” and five voting, “no.”

Earlier in February, the county’s finance committee voted 5 to 2 to approve restructuring the purchasing department and placing it under finance.

At this month’s commission meeting, Dist. 6 Commissioner Whitey Hitchcock made a motion to have the purchasing department report to the finance director.

Why the Commission is making this change was explained by Dist. 6 Commissioner Steve Mead, who said both the Finance Director Natalie Erb and the Purchasing Director Tony Foremen were hired by the county around the same time last year, shortly after county commission passed switching to the 1981 financial management system, and at that point in time, the county finance committee discussed whether to have purchasing report to finance, but decided it was inappropriate to place two new hires in a position where the new purchasing director reported to the finance director.

Mead said now is the time to structure the departments as was previously discussed since the hires have had ample time to adjust to their new roles.

Dist. 8 Commissioner Myron Iwanski, the original maker of the motion, argued the administrative restructuring will not create any major changes in the way the two departments operate, and said it is going to “simplify the way things are done.”

Commissioners voted 13 to 0 to approve the motion. Commissioners absent from the meeting were Mark Alderson, Robert McKamey, and Chuck Fritts.