Recalling the integration of Clinton High 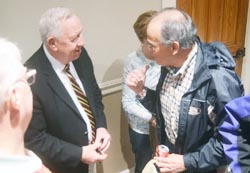 Wednesday, March 1, Jerry Shattuck spoke about his experiences during Clinton High School’s desegregation in the fall of 1956.

“The weather forecast couldn’t keep them away,” Cheryl Henderson of the ETHS said before introducing Shattuck.

She was correct in her assessment. A few empty chairs — six, maybe seven — are scattered throughout the assembly, but more people are standing in the back, waiting for the lecture.

Shattuck opened the talk by asking the audience — at least those who were alive at the time — to remember 1956.

“We had the best looking girls ... The best rock and roll,” Shattuck said.

“We didn’t have helicopter parents … We didn’t need them.”

But they had segregated schools.

“Our culture had a malignancy, and that was segregation,” Shattuck said.

The story of the Clinton 12 and Clinton High School’s desegregation in the fall of 1956 has been told countless times. A documentary has been made about the experience. A fictionalized account of that fall has been made: “The Intruder” starring William Shatner.

He gave a brief history of the events that led to integration of Clinton High School. The legal actions, the acceptance of the community.

“The editor of The Courier News wrote editorials, the pastor at First Baptist Church — the largest church in Clinton — gave sermons … About accepting the law of the land,” Shattuck said.

He said Clinton and Anderson Countians, by and large, thought, “It was no big deal.”

“For us, it was a transition to make. And it was the greatest social and cultural revolution of our time,” he added.

That revolution came with a price … The price being the presence of John Kasper.

“John Kasper showed up the Sunday before school began that fall,” Shattuck recalled. “He was passing out hate literature.”

“There were cars with license plates from all over … Alabama, Georgia, South Carolina, Arkansas. Yes, there were local people who protested, I wish there weren’t, but 90-percent of the people in Anderson County accepted this,” Shattuck said.

She said they resented the cross burnings, the attempts at intimidation, the disruption of what would have been a quiet transition.

“A Home Guard was formed. Now, if the community were so much against this you think it could form a home guard?” he asked.

He said Clinton High athletes were asked to keep watch in the hallways at school.

And one day members of the council stormed into the school. The pushed through the door and shoved aside a teacher who was trying to help them, the wife of the principal.

“We had athletes, football players, in the hallways to stop this kind of thing,” Shattuck said. “But you know who stopped this nonsense? The lead chair trumpet player of the school band. She just ran at them shouting and they took off.”

As a senior, president of the CHS Student Council, and captain of the football team, Shattuck played the role of peacekeeper within the walls of his school, something he downplayed.

When asked during the “question and answer” portion of his program about “his courage,” Shattuck denied being courageous.

“This was my community, my school … There was talk we weren’t going to be able to graduate that spring,” he said. “We resented this trespass on our community and on our school.”