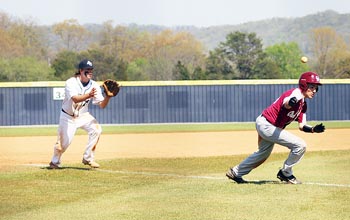 Anderson County pitcher Chase Elkins waits for the ball as an Oak Ridge baserunner is caught in a rundown between third and home.
The Anderson County Mavericks split the regular season series with Oak Ridge last week as head coach Ben Downs picked up his 200th win.

On Monday, the Mavericks traveled to Oak Ridge and fell to the Wildcats by a score of 11-1.

Anderson County scored their lone run in the top of the first when Denver Hubbard picked up an RBI on a groundout, which scored Rhett Bowling. Oak Ridge tied the score in the bottom of the first and the two teams remained deadlocked until the bottom of the fourth when the Wildcats scored eight runs. They added two in the fifth to win the game in five innings.

The offensive highlights for the Mavericks were few as Chase Elkins went 2-2 while Bowling was 1-3 with a stolen base and a run scored.

“We didn’t play very well. Ryan [Moog] didn’t have his best stuff like we’ve been accustomed to this year. With this new pitching rule [mandatory rest], our pitching wasn’t lined up how I want it. Some of the guys we usually go to in those situations were still on rest days,” explained Ben Downs, head coach of the Mavericks.

During an in-school game on Tuesday afternoon Anderson County got some measure of payback as they downed the visiting Wildcats 7-4, giving Downs a landmark win in his coaching career.

Oak Ridge scored a couple of unearned runs in the top of the first to take a 2-0 lead.

Bowling led off with a single for the Mavericks and Zeke Meyers followed with a base hit as did Hubbard. Trey Noe bounced into a fielder’s choice to score Bowling but that was all Anderson County could get in the inning.

Trailing 2-1 in the bottom of the second, the Mavericks plated three runs. Moog reached first after being hit by a pitch and Bowling walked. Both scored on a single by Meyers. Hubbard reached on an error, as did Noe, to load the bases. Andy Fox drew a walk to score Meyers and give Anderson County a 4-1 lead.

The Wildcats added an unearned run in the top of the third to make it a 4-3 game. It could have been much worse for the Mavericks but the inning ended with an odd double rundown, as a runner on third was trapped between third and home following a hard grounder to Fox. During the rundown, the batter raced around first and second. The runner at third was tagged out and the runner from second was caught between second and third. He was eventually tagged out to end the scoring threat.

The Mavericks added two in the bottom of the fourth when Bowling led off with a walk and Noe doubled. Both scored on a double by Fox.

Anderson County added an insurance run in the fifth when Jonathan Hodge got a one-out single and later scored on an error.

Oak Ridge got a run in the sixth but Elkins, who got the start for the Mavericks allowed no more.

He went the distance for the win. Elkins allowed one earned run on seven hits with eight strikeouts and a walk.

“It was good to see the guys bounce back from Monday’s game. It was number 200 for me, and that means a lot. I’ve been very blessed with special players and some great assistant coaches over the years. It’s more about other people than just myself but it was neat to get that win for sure,” Downs said.

After the Cherokees took a 1-0 lead in the first, the Mavericks answered with five in the third. South Doyle plated a run in the bottom of the inning to tie the game at 5-5.

The Mavericks scored twice in the top of the fourth to go up 7-5. The Cherokees got a run in the bottom of the seventh inning as the Anderson County bullpen was lights out.

Sheev Patel got the win in relief as he went two innings and allowed no hit and no runs with one strikeout.

Hubbard got the save as he pitched two innings and allowed just one hit and no earned runs with two strikeouts. He also went 3-4 with a home run and five RBI, pacing the Mavericks in their huge third inning.

Bowling was 2-4 with a double and RBI.

Moog and Hodge each collected a pair of hits.

“We played pretty solid. South Doyle has improved quite a bit. If we can the way we played rolling, we’re going to have a chance to make a little run and beat some teams that people maybe don’t think we can beat. We threw it well. We hit it really well and we fielded well,” said Downs.

The Mavericks return to action on Wednesday when they visit Campbell County at 5:30 p.m. On Friday, they travel to Cocke County for a 6 p.m. game.