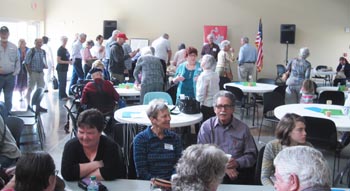 In addition, district chairs and vice chairs representing the eight voting districts in Anderson County were up for election.

Turnout was much better than expected, with almost 120 new Democrats signed up.

There has been an upward trend in interest in the Anderson County Democratic Party since the election of President Trump in November, party officials said.

Starting with the record breaking attendance at the “Standing in Solidarity” event in January, many people have expressed an interest in membership with the party.

“People are angry and looking for a way to make a difference, to fight back. We are glad to be available to help them with that” party secretary Scott Julius said.

Dr. Eric Keller was elected new chairman of the Anderson County Democratic Party at the end of the convention. He takes over from now former chairwoman Catherine Denenberg, who is also a current State Executive Committeewoman.

She had been chairwoman of the party since March, 2013. Dr. Keller is a retired Army chaplain who teaches political science classes at the University of Tennessee-Knoxville. Other officers elected Saturday include First Vice-Chair Ellen Faby, Second Vice-Chair Joe Lee, Secretary Scott Julius, Treasurer Jean Hiser, and Newsletter Editor Pat Fain.