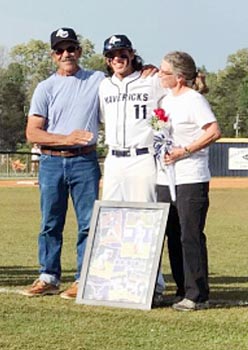 Anderson County High School senior baseball player Colton Zenni on Senior Night last Wednesday with his parents, dad Marty Zenni (left) and mom Andy Sessions (right).
He made a promise to his grandfather and he kept it.

In November 2016, he achieved the rank of Eagle Scout. His Eagle Scout ceremony took place on Sunday.

Among the requirements for the rank of Eagle Scout is accumulating 21 Merit Badges. Of that 21, the following 13 are required:

• Citizenship of the community

• Citizenship of the nation

• Citizenship of the world

• Swimming or Hiking or Cycling

Another requirement is holding numerous leadership positions within the troop.

Completion of an Eagle Scout project is also required — a project that sufficiently displays leadership skills. His project was the construction of an existing stage at Norris Middle School. It required him to raise about $7,000 for the project.

“It took about two months of work and many more months of meeting with architects and engineers, going in front of the school board as well as the Anderson County Grounds Committee to get approved. There are many steps to becoming an Eagle Scout. It’s not something easily obtained,” Zenni said.

And what was he reaction when he found out he had become an Eagle Scout?

“My grandfather always wanted me to become an Eagle scout and he motivated me and provided me with counsel. I talked to him about a week before he passed and I promised him I would obtain the rank. It felt really good to know that I fulfilled my promise to him and made him proud. I knew he was smiling on me,” Zenni said.

The Andersonville native started in scouting when he was in the first grade as a Cub Scout and eventually became a Boy Scout — roughly 11 years total as a scout.

Zenni said a Boy Scout recruiter came to his class when he was in the first grade.

“I was lured in by the prospect of shooting a bow and arrow and a BB gun,” he said. “Once I learned what it was about, I started talking to my cousin Casey Hungerford, who I’ve always looked up to, and he’s an Eagle Scout,” Zenni explained.

Hungerford is now a Green Beret.

“He’s the person who really inspired me to stick with it,” he said.

Zenni has been a member of the Mavericks’ baseball squad since his freshman year. He is the lone senior on this year’s team. He’s been playing baseball since he was five years old.

He said his experience in scouting has given him practical skills such as survival training and emergency preparedness even his cooking ability improved as a result of earning his cooking badge.

“The skills I gained that are more important are leadership and people skills — the ability to work through adversity, just simply problem solving,” Zenni said.

“Obviously Eagle Scout is a big accomplishment. I’m super proud of Colton and the fact that he’s the only senior. He came in [high school] with about eight freshmen, who played baseball and for whatever reason, they gained other interests or maybe didn’t think it was what they thought it was going to be...Colton is the only one in that class that has stayed the course. I think those qualities — like overcoming adversity and problem solving have really helped him. He’s hit some walls and found a way to get through and he’s a great young man. I have nothing but respect for him and what he’s done in his four years at Anderson County High School,” said Ben Downs, head coach of the Mavericks baseball team.

“We’re always asking for members of our teams to be a leader - stand up and lead your team, when it’s good, when it’s bad. Colton, he does that. In times of adversity, he leads wherever he’s at, on the field or off. He’s a leader. All of these things go together — being an Eagle Scout, being a leader, doing things the right way. He’s a great student and never gets in trouble. He’s everything you want a student athlete to be. We wish we could clone him and make some more of him,” said Gary Terry, assistant principal and athletic director at ACHS.

Zenni plans to attend High Point University near Winston-Salem, North Carolina and major in communications with a concentration in media and popular culture.

“I really want to be a sports broadcaster,” he said.

If his past record is any indication, Sportscenter — or better — is in his future.